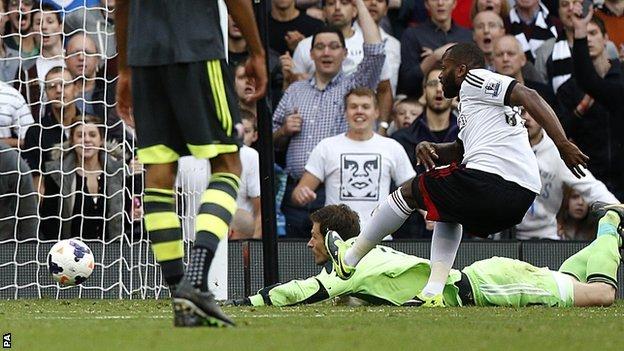 Fulham striker Darren Bent came off the bench to grab the winner against Stoke at Craven Cottage and ease the pressure on manager Martin Jol.

A shot from Pajtim Kasami deflected into the path of Bent and he expertly cut inside Robert Huth before slotting home an 83rd-minute winner.

Both sides had first-half penalty appeals turned down.

Jol was booed after the 2-1 home defeat by Cardiff last week but this time there was a mixture of joy and relief at the final whistle as Fulham ended a run of four defeats in five league games.

Stoke manager Mark Hughes was making his first return to Craven Cottage since resigning in summer 2011 and it proved an unhappy one as his side suffered a third league defeat in a row.

The first half was a fractious affair with the main talking points concerning the decisions of referee Roger East rather than the football on display.

Fulham midfielder Kasami escaped with a warning after reacting to the close attentions of Erik Pieters by lashing out and appearing to catch the Stoke left-back on the back of the head with his hand.

Martin Jol gets a win against his predecessor and he has Darren Bent to thank for it. That could bring some calm to Fulham and give them some sort of foothold in the season. The win is an absolute lifeline.

Stoke then thought they should have had a penalty when Stephen Ireland went to ground following a sliding challenge from Philippe Senderos, although there did not appear to be any contact.

However, the visitors were further aggrieved at another penalty appeal being declined.

Striker Jon Walters was running through on goal when he went down after his heels were caught by the falling Fernando Amorebieta, although East awarded a free-kick after deciding the initial offence of a shirt pull took place just outside the area.

Huth had a header from a corner cleared off the line before the focus again switched to the referee.

This time it was Fulham appealing for a penalty. Forward Bryan Ruiz appeared to be tripped by Potters defender Marc Wilson but East again chose not to award a spot-kick.

There was some better football on show after the break and Marko Arnautovic had a rare shot saved by Fulham keeper David Stockdale just after the hour mark.

Stoke carried the greater threat and Ireland volleyed wide from a left-wing cross before Riether again cleared a Huth header off the line.

Riether also produced a surging run down the right before having an angled shot saved.

Fulham had struggled to create chances throughout the game but when an opportunity came Bent's way, he took full advantage in clinical style to secure a first home win for the Cottagers since 1 April.

"We cannot really believe we lost. We were totally in control but two key decisions didn't go for us and they were two stonewall penalties in my view.

"I was really disappointed that we did not get those key decisions. The timing of them affected the shape and outcome of the game.

"I thought we were positive and were really trying to go for the win and maybe were guilty of trying to be too positive.

"I think they had one shot at goal after the break and were able to convert it."