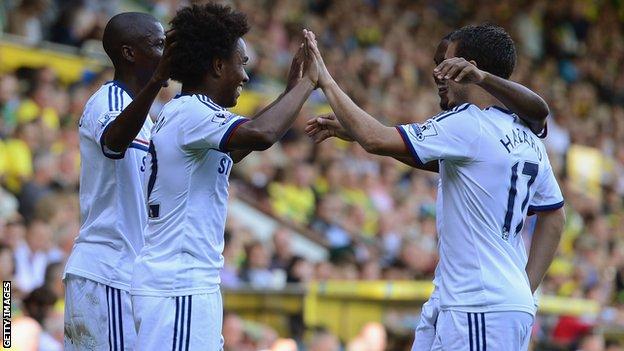 Late goals from substitutes Eden Hazard and Willian defeated Norwich and gave Chelsea their first Premier League away win of the season.

Oscar put the visitors ahead with a first-time shot from inside the area, but Anthony Pilkington equalised with a header midway through the second half.

Norwich pressed late on but they were punished when Hazard stabbed in after a swift counter attack.

Willian curled in a third a minute later to seal victory.

Memories of 2007 for Mourinho

Jose Mourinho's last Premier League away win as Chelsea manager was the 2-1 victory at Reading in August 2007. Frank Lampard and Didier Drogba scored Chelsea's goals in that match.

The win was much needed for Jose Mourinho, with his side having struggled away from Stamford Bridge prior to arriving at Carrow Road.

The Blues boast a 100% record at home in the league but had drawn two and lost one of their first three away games.

But victory at Norwich means they head into the international break third in the table, just two points behind Arsenal and Liverpool.

Denied the services of suspended and injured striker Fernando Torres, Mourinho gave Demba Ba only a second start of the season.

The former Newcastle man was evidently determined to prove his worth, making a nuisance of himself from the outset and taking only four minutes to make a telling impact.

Frank Lampard lofted a pass towards the Norwich area for Ba, who shook off the attention of a defender to bring the ball under control and then clip a pass for the onrushing Oscar, who finished with the outside of his boot.

It was all so effortless, a word that summed up Chelsea's play in the early stages of the game as they sprayed passes around with ease.

Only a smart save from John Ruddy prevented the visitors adding a second in the 14th minute as Juan Mata showed great vision to cut open the Norwich defence and put Ba clear on the left, but his low shot was tipped wide by the City goalkeeper.

Still, the visitors needed to be alert at the back as Norwich's first chance almost brought the equaliser. Robert Snodgrass got in behind the Chelsea defence and crossed for Jonny Howson, but his close-range shot was kept out by Petr Cech at his near post.

That chance gave the Canaries belief that openings were there to be exploited and the momentum of the game shifted in their favour after the break.

Winger Pilkington had a penalty appeal waved away after going down in the area under a challenge by Ramires, before John Terry hooked a clearance off the chest of Ricky van Wolfswinkel as the striker attempted to get on the end of Robert Snodgrass's ball.

But the hosts were deservedly level when Van Wolfswinkel cushioned a header from Martin Olsson's cross into the path of Pilkington, who nodded in from barely six yards.

From then on the game was wide open. Chelsea defender Branislav Ivanovic forced Ruddy into a low dive, while the introduction of Nathan Redmond added bite to the Norwich attack and he saw a decent drive saved by Cech.

The home side could sense a possible winner and they pushed forward inside the final 10 minutes, but that ultimately proved their undoing.

Willian sparked a quick counter and fed a pass to Oscar, who in turn picked out Hazard's run and the Belgian capitalised on Alex Tetty's attempted clearance to poke the ball under the body of Ruddy.

A minute later the win was confirmed as Willian pounced on a loose ball before expertly curling a shot into the net for his first Chelsea goal.

"There are lots of positives to take from the game. It [losing] is obviously very difficult to take at this moment. We had worked ourselves back into the game after a difficult start to put ourselves in a position where, when we equalised, I did not think we would lose the game.

"I doubt there was anybody watching who did not feel we did not deserve anything from the game."