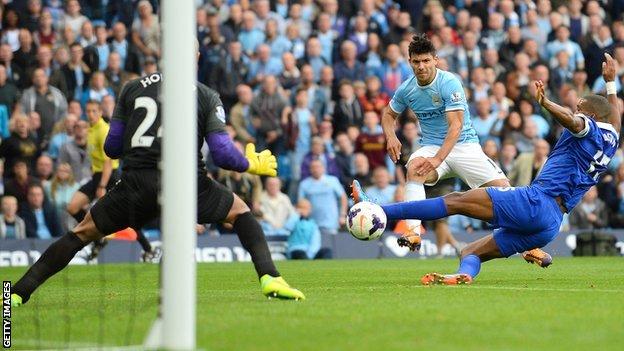 Manchester City ended Everton's unbeaten Premier League start with a stylish attacking victory that was the ideal response to the Champions League humbling against Bayern Munich.

But Alvaro Negredo equalised with a cool finish from Yaya Toure's pass.

Sergio Aguero's low strike made it 2-1 and his penalty, which went in off Tim Howard's head, sealed the win.

The spot-kick, awarded after Seamus Coleman tangled with Pablo Zabaleta but hotly disputed by the visitors, was credited as an own goal to the unfortunate Howard as the ball hit the diving goalkeeper and crossed the line after initially striking the post.

Romelu Lukaku has scored seven goals in his last six Premier League appearances. The on-loan Chelsea striker has only played 302 minutes overall in that period, so averages a goal every 43 minutes.

Lukaku's goal was the first that Manchester City have conceded in the first half in the Premier this season.

It helped ensure City's fourth consecutive home league win, and the victory was a much-needed boost after the painful 3-1 defeat by Bayern on Wednesday and last week's shock league loss to Aston Villa.

But, as impressive as they were in attack, the defensive display in a thrillingly open first half will once again be questioned.

Vincent Kompany was the only player to keep his place in the starting back four from Wednesday and they lost their inspirational captain to what looked like a leg muscle injury after 33 minutes.

Everton had already looked a threat before then with the ever-impressive Ross Barkley, Steven Naismith and James McCarthy having the better of the midfield battle.

But it was the pace, power and direct running of Lukaku that was the focal point for their attacks.

England keeper Hart - so heavily criticised for his recent performances - did well to prevent Lukaku giving the visitors the lead with an early chance, but he was then beaten by the Belgian when the on-loan Chelsea striker nipped past Joleon Lescott and curled the ball home.

Hart got a strong touch but concerns over his attempt were soon forgotten as the home side levelled within 60 seconds.

Toure played a delightful pass behind Coleman, and Negredo slipped the ball home via a big deflection off the scrambling Howard.

Gareth Barry's absence had deprived Everton of their defensive shield and City began to exploit it ruthlessly.

A superb quick free-kick involving Toure and a beautiful first-time pass from David Silva should have seen City go ahead soon after, but Aguero placed his effort narrowly wide of the far post.

Argentine striker Aguero then made a mess of a great opportunity to get through one-on-one with Howard when he hopelessly miscontrolled a simple pass.

A victory for Manchester City, a first league defeat of the season for Everton and a really entertaining game. City keeper Joe Hart had a mixed afternoon. He would not have been happy with the goal he let in but he was fine after that. Alvaro Negredo's equaliser for City was the turning point and the home side deserved the win in the end.

However, after the hugely impressive Lukaku had a strong shout for a penalty ignored, Aguero made amends by giving City the lead with seconds of the first half remaining.

The excellent Silva, making his first league start since August, slid a perfectly weighted pass down the right-hand side of the box and Aguero struck a first-time shot across Howard and into the net.

Everton were unlucky to be trailing at the interval but that goal changed the complexion of the match and City's defensive display improved considerably.

The visitors would have gone up to second in the table with a win but barely threatened and it was the hosts who posed the far greater threat.

Howard's own goal from Aguero's low penalty gave them breathing space and they could have added to their margin of victory had the American goalkeeper not made fine saves from Negredo and Samir Nasri during a relatively incident-free second period.

"I am very pleased by the character the team showed today. We really needed this victory because at the start of the game we were five points behind Arsenal and it is important to continue wining here at home.

"Equalising immediately was important but more important was the character, playing against Everton - the only unbeaten team in the league.

"After a defeat on Wednesday it was important for me to see how the players reacted after that defeat.

"We had at least four or five clear chances to score and I don't remember Everton having too many chances to score, so I don't think the difference between the two teams was the penalty."

"We made it a really open game and to score the first goal was important. Then you have to be very superior when the calls are not going for you. Unfortunately, on the day, we didn't have that luck that we needed.

"I thought the penalty awarded is a football disaster. Jon Moss [referee] needs to watch it again and see why he gave it. Contact doesn't mean a penalty. If you are going to give a penalty for that it is going to make the game very difficult.

"Romelu's is more of a penalty."