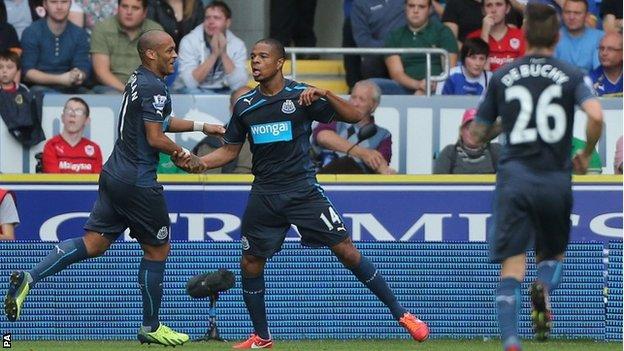 The Magpies dominated early on and led thanks to Remy's two goals in the space of eight first-half minutes.

The France striker cut in to rifle home from 25 yards, and added a second with a cool finish.

Cardiff improved after the break and Peter Odemwingie's low shot reduced the arrears, but they could not find an equaliser as Newcastle held on.

The win could ease the pressure on manager Alan Pardew, who had lost two league games in a row as part of a run of three wins from 23.

The Bluebirds, who have now lost their last eight games against the Magpies, had goalkeeper David Marshall to thank for keeping them in a game that saw the visitors dominate the first half.

Newcastle had too much pace and power for their hosts and looked like they could score at will. Marshall produced an instinctive left-handed stop to deny Remy's poke from the edge of the six-yard box.

The Scottish keeper did the same moments later when he tipped Moussa Sissoko's shot from outside the box over the bar.

But the visitors were not to be denied and Remy made it 1-0 when he turned inside and squeezed a right-foot shot just inside the post.

Newcastle's last 12 Premier League goals have all been scored by Frenchman. This is a joint record for most consecutive goals by one foreign nationality, level with Arsenal (also French players) in 2004.

Papiss Cisse's goal in a 1-0 win over Fulham on 7 April was the last scored by someone that is not French for the Magpies in the league.

The home side were hanging on under constant Newcastle pressure and fell 2-0 behind just before half-time.

Marshall saved Papiss Cisse's initial shot but the ball rebounded to Remy and the man on loan from Queens Park Rangers produced a calm finish from outside the box to double his tally.

The visitors could have had a third when Marshall was caught out as Newcastle midfielder Yohan Cabaye's speculative free-kick hit the post.

City manager Malky Mackay introduced Jordon Mutch at half-time and 13 minutes later he delivered a square ball for Odemwingie to score his first league goal for his new club.

The England Under-21 midfielder gave Cardiff some much-needed creativity and he started to dictate the play as United struggled to defend their lead.

Cardiff's best chance to equalise fell to Mutch in the dying moments when he tried to chip Magpies goalkeeper Tim Krul, but the Dutchman saved.

The home side kept pushing for the equaliser but Newcastle hung on to record a vital victory.

"We played against good players who punish you if you don't play for the whole game.

"They are a good team, with an experienced manager with footballers with international experience."

"I think it was an important win. On Monday night [against Everton] we let ourselves down as a group and we wanted to put it right.

"The first half was as good as I have seen us play, even going back to the year we finished fifth. We locked them in and we had a more offensive look to us.

"We did not play as well in the second half but we at least showed resilience that when the home team put pressure on us we can cope with it.