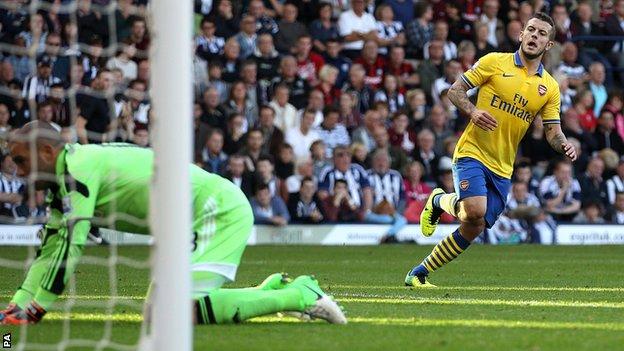 Jack Wilshere's second-half strike earned Arsenal a point at West Brom and returned the Gunners to the top of the Premier League on goals scored.

Olivier Giroud almost won it for the visitors but Boaz Myhill denied him.

Defeat would have been harsh on Steve Clarke's side, who followed last weekend's victory against champions Manchester United with a slick performance which saw them become the first team to take points off Arsenal since Aston Villa won at Emirates Stadium on the opening day.

The Baggies were composed in possession and a constant threat in the final third as the fluid movement and creativity of their front four continually exposed the Arsenal defence.

England Under-21 international Saido Berahino, who scored the winner at Old Trafford last week, produced another excellent display up front while Amalfitano and Stephane Sessegnon linked well with Anelka to cause the visitors problems.

Gunners on a roll

But Arsenal also had their moments and showed a resilience which is marking them out as genuine title contenders.

They were indebted to goalkeeper Wojciech Szczesny early on, the Pole getting down well to deny Berahino, who cut inside and fired in a low shot.

At the other end, Aaron Ramsey had Arsenal's best opportunity and the impressive Myhill reacted instinctively to beat the ball clear after his fellow Welshman's shot found its way through a crowd of players.

That save lifted the hosts, who went straight up to the other end and took the lead - Amalfitano putting an inch-perfect cross into the box from the right for Yacob to head home from six yards out.

The hosts pressed for a second after the break and former Arsenal striker Anelka miscontrolled in the area after Berahino powered past Per Mertesacker on the left.

Mertesacker was having a shaky 10 minutes - which led to him being shifted from the right side of central defence to the left - and Anelka sprinted past the German before curling a shot agonisingly wide.

Arsene Wenger's side gradually began to assert their authority in midfield and equalised in impressive style when Tomas Rosicky and Giroud combined to tee up Wilshere for his first Premier League goal in almost three years.

The England midfielder was now snapping into the tackle and spraying passes around - his clever ball forward splitting the Baggies defence and putting Giroud through, but Myhill saved well as the Frenchman tried to round him.

Both sides continued to drive forward but struggled to break through, settling for a hard-earned point which sends Arsenal into the two-week international break at the league's summit and lifts West Brom up to 12th.