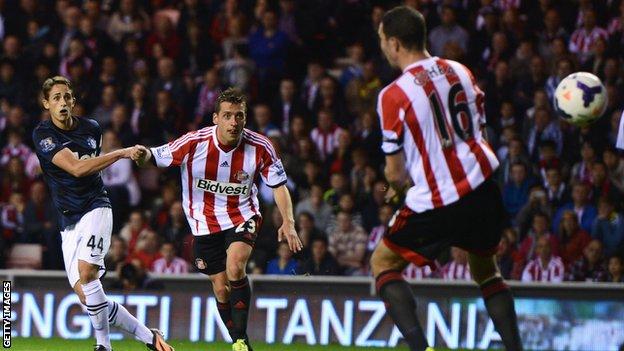 United could have been in deeper trouble had goalkeeper David De Gea not saved magnificently from Emanuele Giaccherini's header before 18-year-old Januzaj celebrated his first league start with a double strike to turn the game around.

It was tough on Sunderland, who provided a glowing reference for interim head coach Kevin Ball's credentials to succeed the sacked Paolo Di Canio before they were deflated by Januzaj's brilliance and ran out of steam.

The gifted youngster's goals and performance brought great relief for Moyes, who had been under the spotlight following United's indifferent start to the season and embarrassing defeats in the Manchester derby and at home to West Brom.

It may not have been United at their most fluent but a win was the sole priority on Wearside and Moyes will now hope the reigning Premier League champions move towards top gear.

For Sunderland, it was another defeat that leaves them rooted to the bottom of the Premier League with only one point from seven games - but they can take heart from many aspects of this performance and will look back on De Gea's brilliant save as the decisive moment.

Moyes was able to pair the returning Wayne Rooney and Robin van Persie in attack - but it was at the back where United had all the problems.

And they were in evidence inside five minutes when Phil Jones and Nemanja Vidic failed miserably to deal with Giaccherini's cross and the loose ball was drilled low past De Gea by Gardner.

There were ominous signs for United in their failure to cope with Jozy Altidore's physical approach, with even the usually formidable Vidic struggling to contain the powerful striker as he was brushed effortlessly off the ball in some fierce exchanges.

United, wisely given the vulnerability of their defence, were attempting to keep Sunderland back - but that was no easy task against a side bristling with energy and making a complete nonsense of their early season struggles.

Nani had the visitors' best first-half opportunity but volleyed carelessly across the face of goal from Evra's inviting cross.

It took a world-class save from De Gea to stop Sunderland extending their lead when Adam Johnson crossed for Giaccherini. The diminutive forward was alone and was turning away to celebrate a headed goal when De Gea produced a quite magnificent flying save, one-handed and away to his right.

Giaccherini could blame no-one but himself when he wasted another opportunity as half-time approached, scooping over from eight yards after Johnson weaved through more shambolic work from United's defenders.

Januzaj had shown flashes of promise, though he was booked for a clear dive, and turned them into the finished product to put United level after 55 minutes when he timed his arrival perfectly to meet Evra's cross with a calm side-footed finish.

His second goal to complete the turnaround six minutes later was even better, showing real class to send a low left-foot volley past Westwood when Sunderland defender John O'Shea could only partially clear a cross.

Van Persie wasted an opportunity to make the scoreline more emphatic as he missed when clean through on Westwood - but Moyes looked a satisfied man as he celebrated at the final whistle.

"I thought the first half we worked ever so well. I thought we deserved the goal and we had a couple more chances.

"Half time comes and we have the lead, but you are aware that the opposition will come out firing in the second half and that is what they did. In the Premier League you need to take your chances."