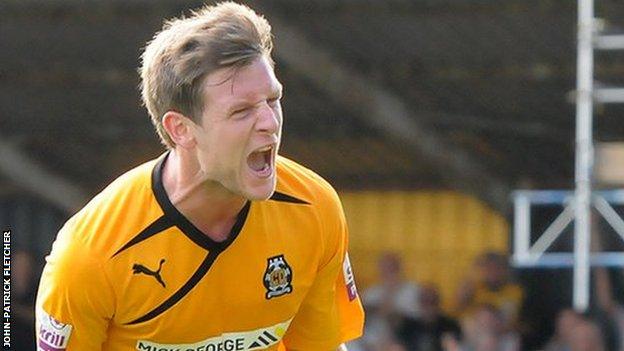 Adam Cunnington steered home a second-half winner at Grimsby to extend Cambridge United's unbeaten start to the season to 14 matches.

The striker pounced on a Richard Tait corner to send the U's eight points clear at the top of the table.

Cambridge goalkeeper Chris Maxwell made a stunning save minutes later to deny Lenell John-Lewis from the penalty spot after Ian Miller brought him down.

U's striker Liam Hughes went closest to breaking the deadlock in the first half, forcing James McKeown to scramble and tip his free-kick around the post.

John-Lewis tested Maxwell on the turn, while Patrick McLaughlin also troubled the visitors' defence with a series of dangerous crosses.

After the break, McKeown pushed Harrison Dunk's effort from distance over the bar with a fingertip save.

But the Mariners keeper could not do anything to foil Cunnington, as Grimsby slipped back to sixth place in the table after going into the match second behind the U's