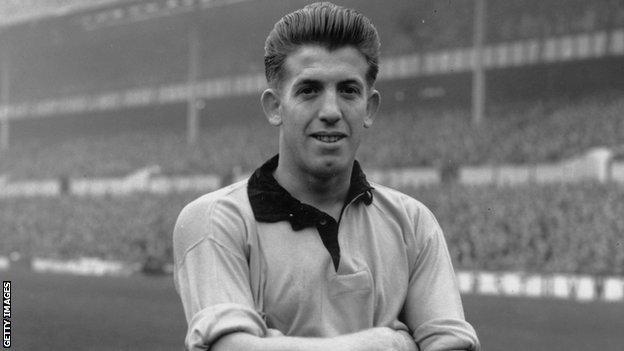 Wolves legend Peter Broadbent has died at the age of 80 following a long battle with Alzheimer's disease.

The inside forward scored 145 goals in 497 appearances for the Molineux side after joining from Brentford for a then club-record fee of £10,000 in 1951.

Sir Alex Ferguson said that, when he was growing up, Peter Broadbent was his favourite player. That is a testimony to his high esteem and ability

After joining Shrewsbury in 1965, he moved on to Aston Villa and Stockport.

In a statement on the club website, Wolves said Broadbent was "regarded by many as the greatest ever to don the old gold and black".

He was also widely regarded as one of the greatest players to play for Shrewsbury Town, even in the short 18-month stay he enjoyed with the then Division Three club.

Statistics for league games only

"He graced the football field with his style and his ability.

"Both of us were elected into the Wolves Hall of Fame on the same night. His wife was there to collect his award as he was unwell.

"They did a link with Sir Alex Ferguson on video and he said that, when he was growing up, Peter Broadbent was his favourite player.

"He loved the player. I think that is a testimony to the high esteem and the ability he had got."