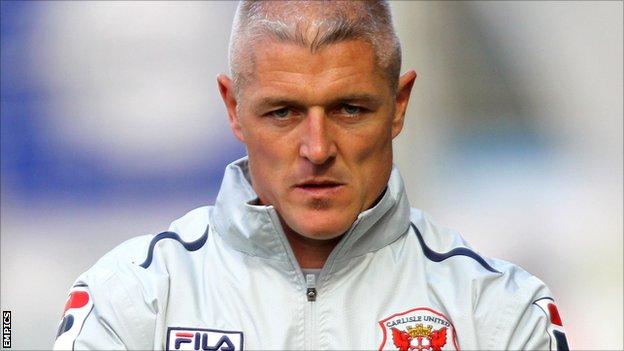 Graham Kavanagh says he is ready for the challenge as Carlisle United's full-time manager after four years as a coach at Brunton Park.

The team has won three games since then, prompting the board to offer the 39-year-old a permanent deal.

"I'm as ready to be a manager as I'm ever going to be," Kavanagh told BBC Radio Cumbria.

"The opportunity is a great one because I already have a mindset into the players, the strengths and weaknesses."

The Cumbrians have moved up to 14th in the League One table since he took charge.

Working with Kavanagh, who made 78 appearances for the Cumbrians at the end of a career which yielded club honours and international recognition for the Republic of Ireland, will be assistant David Irons and first-team coach Tony Caig.

They have been promoted from the roles of academy manager and goalkeeping coach they filled under Abbott.

"I've learned a hell of a lot in the last three weeks about myself, the players and the staff," Kavanagh added.

"Management is a 24-hour-job, you're on the phone to the physio, the chairman, the directors, agents, then you actually start to think about the football side.

"I'm organising the training with the staff and we're just doing things slightly differently, I feel everyone is right behind me.

"I took all the staff out for some food, and had a quick chat with them to say the way we've been the last three weeks has been magnificent, and we all need to keep pushing the same direction.

"They have been absolutely amazing."