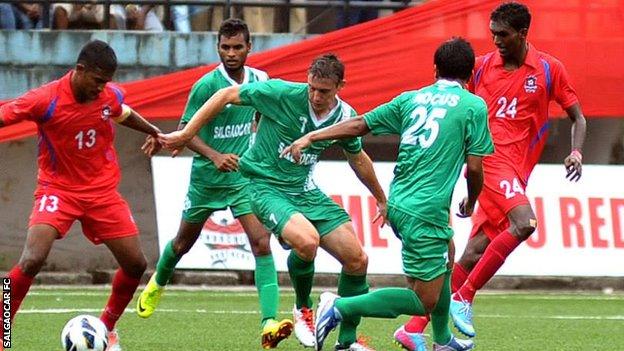 When striker Darryl Duffy embarked on his childhood dream to play abroad, he had no idea what to expect from his new adventure.

At the very least, he thought he would get a seat on the team bus.

"If you're not quick you're sat on the floor with your feet dangling out the door," the bemused 29-year-old told BBC Sport.

Welcome to life as the only Scotsman in India's I-League.

"It's about an hour and 15 minutes to training and the bus stops at various points to pick up players," he continued.

"By the time we arrive there's three or four boys on the floor, some will sit on the other boys' knees. There will also be a couple in the front cabin with the driver."

This summer former Rangers trainee Duffy, 29, became the third foreign player, alongside Frenchman Claude Gnakpa and Nigerian Chika Wali, to sign for Salgaocar in Goa, who claim to be "India's most popular football club".

And moving 4,700 miles from his West Country home, to his 10th club, has provided some obstacles for the man who had previously spent his entire career in the UK.

"Sometimes I think I'm getting stick from the players because they talk to each other in Hindi and start laughing at me, but I've not got a clue what they're talking about," he laughed.

"And anything that you can think of in Britain is the opposite here.

"There are no pavements, no road laws, and there are wild dogs everywhere. There are no fields or fences for the farmers, so buffalo just walk in the road."

Precarious coach travel and wild beasts aside, Duffy appears to be prospering in alien surroundings after a year of discontent.

His journey began at Rangers in 2003 and he went on to have spells at Falkirk, Hull, Swansea and Bristol Rovers - where he partnered now England and Southampton striker Rickie Lambert.

Duffy joined League Two Cheltenham at the start of the 2011-12 season, finishing top scorer with 15 goals and helping them to the play-off final, where they lost out to Crewe at Wembley.

But he was cast aside the following year, making only five starts, and it prompted huge change in his life.

"There was never any danger of me signing again, not after the season I'd had," he said.

"I'd asked to go out on loan three times because I wasn't playing but I was told I was needed at the club.

"I ended up sitting on the bench all season. I couldn't stay there for another season in case the same thing happened again."

Duffy ended up heading home to Scotland in May, where he trained with Kilmarnock, but a call from fellow pro Alan Gow - now at Exeter but previously at East Bengal - gave him the idea about a move to India.

"The whole time I said 'no, I'm not interested'," Duffy said of conversations with Gow. "But I came over for a week and was pleasantly surprised by the club. It's just like any other club in Britain in how professionally it's run.

"I signed a contract before I left. I'd been speaking to my wife, Claire, over the week and she said 'if you think we can give this a good go then let's do it'.

"The first two or three days I wanted to come home. It was monsoon season so I couldn't really go out and do anything.

"I thought I was prepared for what I was coming over to, but it was a massive culture shock.

"I was on the phone to my wife thinking 'this isn't happening', but she told me to stick it out. I'm really glad that I did."

And now Duffy has morphed in to Salgaocar's star striker.

He has scored five goals in five games in the Goa Pro-League - which leads up to the start of the domestic season - and he netted his debut I-League goal in the 1-0 win over reigning champions Churchill Brothers.

Salgaocar are famous for becoming the first Goan side to win the title - then called the National Football League - in 1999, and amongst their silverware is the 2007 I-League trophy and 19 Goa League Champions Cups.

And Duffy has been impressed by the standard among the team.

"Football-wise there's not a massive difference. Technically there are a lot of very good players, they've just not got the speed of thought that British players would have," he said.

"These boys haven't got academies that will take them in from 12 years old. They come in to a club at 18 and that's their first footballing education.

"So I think the mental understanding of the game is the biggest difference. But if I can bring some of my experience over and help then that would be a big thing for me."

It becomes apparent that Duffy is not treating his move as a long excursion when he talks about how living and playing in Goa has changed his perspective on football.

"At this stage in my career I'm glad I've experienced this because I've had a totally spoiled footballing education," he added. "From 16 years old I was in at Rangers and I've known nothing but first class up until now.

"Everyone is really welcoming here and so friendly. For a country that doesn't have a lot of money, they are the first people to give you things for free.

"If I end up playing back in Britain then I'll appreciate everything that I've got. Maybe that's something I needed to fall in love with the game again."