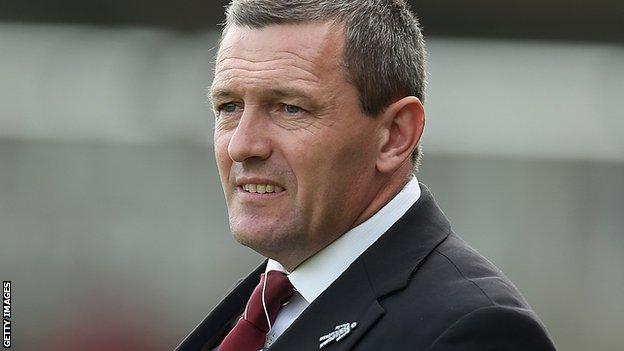 Northampton manager Aidy Boothroyd is on the lookout to increase his attacking options.

"I think the plan is to have a look at who's out there, which we've done.

"We need our forwards, whoever comes in - if we do get someone in - or whoever gets picked, to start scoring goals," Boothroyd told BBC Radio Northampton.

"[If no signings are made] we've got to get the best out of players available."

Blyth, who scored three goals in nine appearances for the Cobblers, has returned to parent club Leicester City, ending his loan until he is fit again.

"Jacob did a pre-season with Leicester's under-21s, comes into the Football League and has an injury because perhaps his body isn't ready," said Boothroyd.

"In times of adversity, you're looking for people to step up, to put in top performances which are expected of them. I'm sure we'll get that. We have AFC Wimbledon away and Oxford away [next up], and both have started very well.

"There is no bigger test than that at this stage for us."

Boothroyd insisted that he has no regrets about the strikers who left the club in the summer, including Louis Moult, who has scored nine goals in 12 appearances for Nuneaton in the Conference Premier, and Adebayo Akinfenwa, who re-joined Gillingham in League One.

"I'm pleased for Louis," he said. "He wasn't going to play here.

"People will talk about Louis and Adebayo being let go, but time moves on.

"To get to where I want us to be, to fill a redeveloped stadium on a regular basis, [to have] a strategy and structure for a club to move forward for the next five or 10 years, it's important that we go through this."

Northampton's injury problems have not been restricted to attack, with only Kevin Amankwaah and Lee Collins ever-present in defence this season.

But Mathias Doumbe and Paul Reid have formed a new centre-half combination which led to their first clean sheet of the season on Saturday against Morecambe.

"It's no surprise that having two experienced, strong centre-halves makes a difference and it's a strong platform to build on," Boothroyd added.