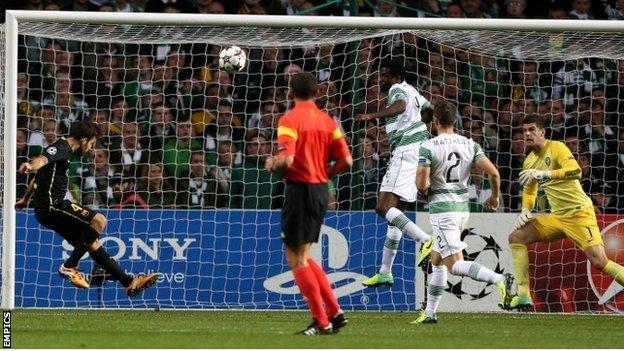 Cesc Fabregas was the match-winner, heading in with 15 minutes left.

The breakthrough for the Catalans only arrived after Brown had been shown a straight red card for kicking out at Barcelona forward Neymar.

Brown flailed a foot that caught the Brazilian on the arm and, despite Celtic protestations, he was dismissed.

Barca's victory may well have come regardless of Brown's dismissal, with the Spanish champions enjoying 82% of possession, and the hosts forced to survive a sustained period of pressure.

It was only Celtic's second home defeat in the group stage of the Champions League, the first also against Barcelona, in 2004.

And it comes a year on from their famous victory against the same opponents last season, when Tony Watt hit a late winner for Neil Lennon's men.

Celtic's sense of injustice over the red card would scarcely have been diminished by Neymar's part in the winning goal.

He picked the ball up in space, deep in home territory, spun and fed Alexis, whose perfect cross was headed back across Fraser Forster by Fabregas and into the net.

Few of the 60,000 supporters inside Celtic Park would have begrudged the visitors the lead had it come before the game took that ugly turn but, as it was, it was greeted with rancour.

What was all the more galling for the home fans was that it came just minutes after Victor Valdes had pulled off the save of the match to keep out a fierce effort from substitute James Forrest, with Charlie Mulgrew heading narrowly wide from the resulting corner.

It had taken until the stroke of half-time for Barcelona - missing the talismanic Lionel Messi - to force a save from Forster.

The goalkeeper on that occasion pushed a Xavi free-kick away for a corner, but until then the protection offered to him by his team-mates had been absolute.

In the face of relentless Barca probing, the back four and the four in front of them stood firm as the visitors passed their way to the edge of the Celtic penalty area, only to find it largely impenetrable.

That led them to try their luck from further out, but first Neymar dragged a shot wide after dancing his way in from the left wing and then the magical Andres Iniesta sold Mulgrew an outrageous dummy but blasted off target.

Forster would have struggled to reach Neymar's deft redirecting of a Dani Alves cross, but happily for the keeper it spun outside the post as he sprawled to his left.

Then came the game's turning point, when Brown was shown a straight red card, and Barcelona took full advantage.

The scoreline might have been even greater but for Forster, who brilliantly denied Neymar twice in the closing minutes.

And while Celtic can be proud of a gallant performance, there was to be no repeat of last year's astounding 2-1 home win as they suffered their second defeat in as many Champions League matches this season.