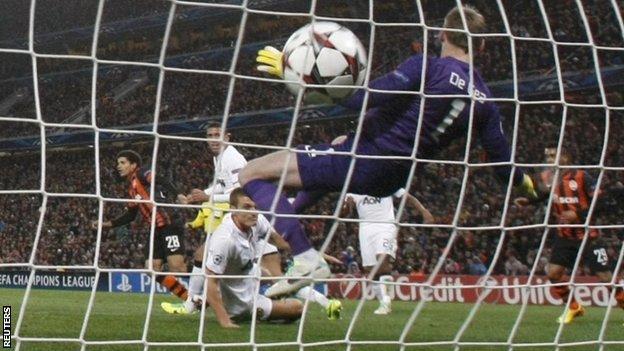 United took the lead early in the first half when Danny Welbeck poked in from Marouane Fellaini's low ball.

David De Gea produced a great save late on to stop Taison scoring the winner.

The result means United, on four points, still lead Group A on goal difference ahead of Shakhtar. Bayer Leverkusen are a point behind following their 2-1 win over Real Sociedad.

David Moyes's men had offered little threat during the opening 15 minutes of the first half, with Robin van Persie going closest to troubling the Shakhtar goal with a curling shot that comfortably cleared the crossbar.

United's early strike came as a surprise and there was a large element of luck about it.

After Antonio Valencia won a throw-in that should have been awarded to Shakhtar, Fellaini turned his marker and delivered low into the area.

Ukraine defender Rakitskiy slipped as he attempted to clear, allowing England international Welbeck to poke in for his sixth goal of the season in all competitions.

Welbeck impressed defensively as well, keeping tight to Shakhtar captain Darijo Srna on the right, although when the Croat and his team-mates found space they were guilty of poor deliveries in the opening 45 minutes.

The Ukrainian side's best chance of the half fell to Alex Teixeira, who scored twice in their opening 2-0 win against Real Sociedad, when he twisted and turned to make himself some space before firing a tame shot from 20 yards that De Gea easily collected.

United looked comfortable for much of the second half too, with Shakhtar's final ball letting them down on countless occasions as they pressed forwards.

Prior to the equaliser, the only time coach Mircea Lucescu's side caused panic in the United defence was when Vyacheslav Shevchuk's dangerous low pass was brilliantly and bravely cut out by De Gea.

United only carved one decent opening after the break when Rafael surged down the right and pulled the ball back to Van Persie in the area. The Dutchman turned before firing in a low shot that came off the boot of Rakitskiy.

And perhaps they paid the price for their lack of adventure when Rakitskiy made amends for his earlier error by firing in a low ball that Vidic could only clear to Brazilian forward Taison, who smashed his shot into the roof of the net.

The 25-year-old came close to scoring the winner with a few minutes remaining when his deflected angled shot was brilliantly tipped over the bar by De Gea.

In what was a largely unremarkable match, there was a remarkable moment in the 66th minute when 39-year-old Ryan Giggs came on for United.

The veteran's 145th game in the Champions League saw him surpass Raul's record number of appearances in the competition.

United face back-to-back matches against Real Sociedad in their next two Champions League ties and return to Premier League action at Sunderland on Saturday.