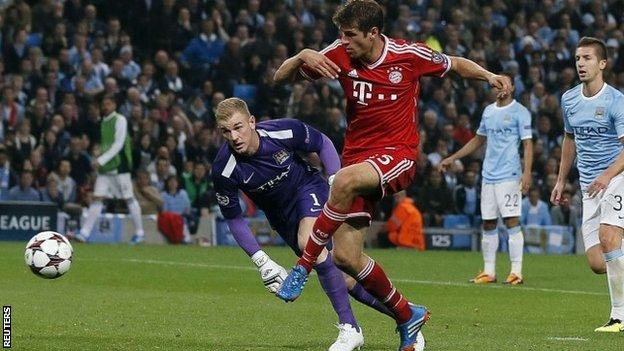 First he fumbled Franck Ribery's long-range effort into the net as the holders took an early lead, then he was too easily beaten at his near post after the break as Arjen Robben wrapped up a thoroughly deserved win for Pep Guardiola's side.

Thomas Muller scored Bayern's second in between Hart's errors and a fine late strike from City substitute Alvaro Negredo could not put any gloss on a wretched night for Manuel Pellegrini and his team.

Former City defender Jerome Boateng was sent off for hauling down Yaya Toure as the hosts mounted a late rally of sorts, but there was little by way of consolation to be salvaged from this experience.

And after a display that only underlined the decline in his performances, much of the spotlight will be on Hart, who is simply making too many mistakes for the comfort of club and country.

Pellegrini's predecessor Roberto Mancini was running short of patience with Hart, 26, before his sacking and the Italian's departure has not inspired any visible upturn in form.

The goalkeeper was slow to react for Andreas Weimann's winner for Aston Villa last weekend, was beaten at a corner by Cardiff striker Fraizer Campbell in August and allowed a shot from James Morrison to go straight through him during England's victory against Scotland at Wembley.

City's manager must now decide whether to keep faith with Hart or replace him with Costel Pantilimon when Everton visit on Saturday.

England boss Hodgson faces a similar dilemma over whether to drop Hart - who has won 35 caps for his country - for the decisive World Cup qualifiers against Montenegro and Poland at Wembley later this month.

Hart was not alone in being off-form, however, as Bayern threatened to run riot. They ruled in all parts of the field, demonstrating the class that won them the Champions League last season and makes them hotly tipped to retain the trophy.

Hart's night of misery began after seven minutes when Rafinha's long pass found Ribery in space on the left. He cut inside and delivered a shot that carried pace and power - but was assisted into the net by a feeble attempt at a stop from the keeper, who got a hand to the effort as it went past him.

It was an error of such magnitude that it prompted loud groans when it was replayed on the big screens and instantly deflated an atmosphere that had been vibrant before kick-off.

David Alaba almost fashioned a second when he again found space on the left. Hart parried his initial cross back to him and the keeper was grateful when the return bounced back into his arms off Matija Nastasic.

If there was any hope for City after a desperate first-half performance it came in the form of the scoreline. Bayern's superiority should have put them out of sight and given them more than their one-goal advantage.

City never looked remotely like recovering after the interval, however, and it was no surprise when Bayern doubled their lead.

Gael Clichy allowed Dante's raking pass to find Muller and the defender then failed to react, allowing the Bayern star to round Hart easily and score.

If Hart was having a shocker, Clichy was not far behind and both were involved - and not in a good way - as Robben made it 3-0 on the hour.

Fernandinho was the first at fault when he conceded possession too easily to Muller in midfield. The Germany international set Robben free to beat Clichy with ease before scoring past Hart, who made another unconvincing attempt at a stop at his near post.

Hart at least made a couple of decent blocks, one which saw Muller strike the post from a rebound, before Negredo at last gave City's increasingly frustrated fans something to cheer with 11 minutes left, scoring from the edge of the area with a fine left-foot shot on the turn.

As the clock ran down, Boateng was shown a red card for a professional foul on Toure.

Substitute David Silva hit the bar from the resulting free-kick - but another City goal would have given the scoreline a farcically close appearance given the huge gulf between the sides.

In the night's other match in Group D, CSKA Moscow - who Pellegrini's side face in their next two games - beat Viktoria Plzen 3-2 to join City on three points.