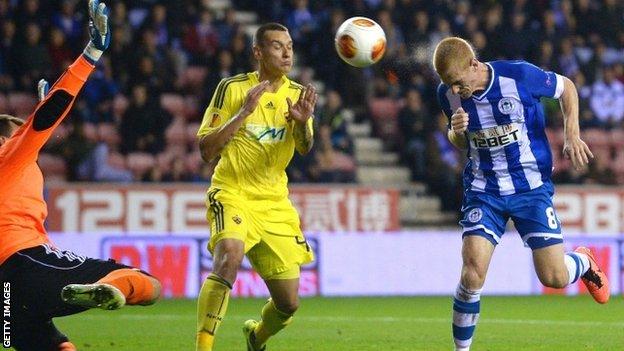 Powell gave the FA Cup winners the lead when he headed in after a horrible mistake by keeper Jasmin Handanovic.

Maribor pulled one back after the interval through Tavares, before Powell fired in his second in stoppage time.

That brilliant individual effort from Powell came just seconds after Latics goalkeeper Scott Carson produced an outstanding acrobatic save to deny Tavares and Maribor from equalising.

The Slovenian club, who are bottom of Europa League Group D after two losses, improved markedly in the second half but they were defensively atrocious during the first 45 minutes.

Owen Coyle's Wigan came into the match having drawn their first group match against Belgian side Zulte Waregem, but slightly worryingly have collected just 11 points from eight Championship games.

Despite underperforming so far this season in the league, the Latics players showed their true class at the DW Stadium on Thursday.

Maribor's goalkeeper Handanovic had performed well in the opening minutes, making a fabulous one-handed save to prevent on-loan Manchester United midfielder Powell from giving the Latics an early lead.

But then came the moment the Slovenian keeper will want to forget. Latics midfielder Beausejour broke free on the left and delivered a deflected cross that looped up in the air towards the six-yard area.

Handanovic came out to punch the ball clear, but instead it spun off his fist and towards the net, allowing Powell to nod in. That was the 19-year-old's second goal for the club.

Wigan doubled the lead soon after. Chilean Beausejour once again supplied the cross, which this time found its way cleanly to Ben Watson, who headed in a similar goal to the winner against Manchester City in last season's FA Cup final.

It did not take long after the restart for Coyle's team to expose the gaps in the opposition defence. Beausejour was allowed to maraud down the left before fizzing in a low cross which Powell could only direct on to the far post.

It seemed all too easy for the Latics, but they were given a jolt moments later. French powerhouse forward Jean Philippe Mendy, who troubled Carson with a couple of firm first-half strikes, forced his way into the area before pulling the ball back for Tavares to score in from 14 yards.

Maribor pressed as Wigan sat back. With a minute of normal time remaining, the Slovenian side must have thought they were about equalise when Tavares launched a vicious strike from 20 yards, but Carson leapt up to push the ball wide.

Seconds later Powell settled the outcome when he danced past a couple of challenges before drilling in a low shot past Handanovic.