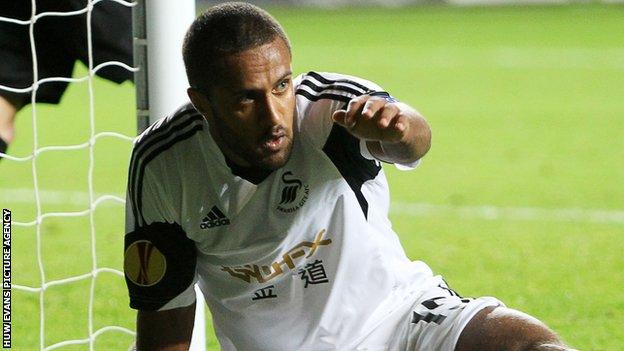 Swansea scored on 52 minutes when Wayne Routledge netted his third goal of the season with a simple tap-in.

Stephane Nater struck a post from long range late on but Swansea held out for a second consecutive group win.

Swans manager Michael Laudrup had warned of a difficult game against a side fourth in the Swiss Super League and unbeaten in 12 matches.

With that in mind Laudrup selected a strong side, with club record signing Wilfried Bony leading the attack.

The Spanish forward was making plenty of running early on and latched onto a through ball by Alejandro Pozuelo but fired into the side netting from a tight angle.

St Gallen slowly settled into the game and efforts from Karanovic and Roberto Rodriguez were a warning to the home side.

And the visiting team had a great chance to take the lead when Rodriguez's cross from the left into the area struck the arm of right-back Tiendalli - with a penalty awarded against the Swans.

But Tremmel dived low to his right to save Karanovic's disappointing spot kick.

Swansea survived another scare when they lost possession in midfield but Marco Mathys slotted the ball narrowly wide of the post.

But they responded and Ben Davies' free-kick caused panic in the penalty area, with the ball tipped onto the post via the head of Jordi Amat before the danger was finally cleared.

The game's frenetic pace continued and only a crucial tackle by Ermir Lenjani denied Pozuelo from having a clear attempt at goal.

Home claims for a penalty were turned down after Michu was kicked in the head by Stephane Besle, resulting in the Spanish forward receiving treatment which saw him sidelined for more than eight minutes.

Michu was still waiting to return to the field when Mathys unleashed a powerful long-range shot which bobbled and almost deceived Tremmel, who gathered at the second attempt.

Bony had a quiet first half but Swansea's record signing fired just wide from outside the box after combining well with Michu.

But the Ivory Coast striker played his part in the move which finally resulted in the game's only goal seven minutes into the second half.

Pozuelo's pass found Bony in the penalty area, and his shot from a tight angle was blocked by Lopar before Routledge tapped the loose ball over the line.

Mario Mutsch fired over the crossbar for St Gallen before goalscorer Routledge was replaced by Nathan Dyer.

The Guinea international masterfully controlled a long ball before beating Amat, only for his attempted lob over Tremmel ending up on the roof of the net.

Swansea substitute Alvaro Vazquez shot wide from a tight angle after racing clear and Nathan Dyer's well-struck volley was brilliantly denied by the legs of Lopar before a thumping long range Nater shot hit the post at the other end.

Swansea held on to make it two wins out of two in Group A and now face back-to-back games against winless Kuban Krasnodar.