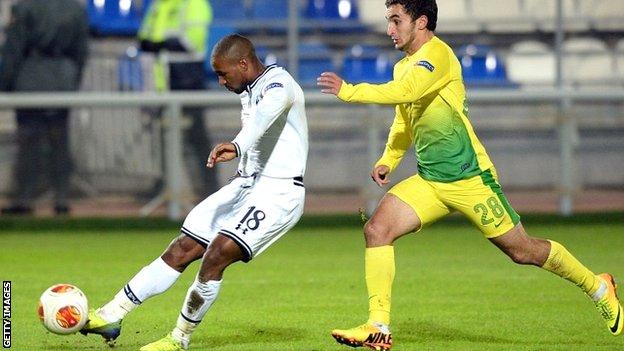 Tottenham took control of Europa League Group K with a second successive victory as they brushed aside a drab Anzhi Makhachkala in Moscow.

Nacer Chadli swept home a low cross from Kyle Walker soon after to double the visitors' lead before the break.

Anzhi substitute Lacina Traore added some class to the hosts in the second half, but they still rarely threatened.

Defoe should have polished his personal goalscoring statistics late on, but dallied after rounding goalkeeper Evgeni Pomazan, allowing covering defenders to snuff out the chance.

Anzhi met Liverpool in the group stages last season, winning 1-0 in Moscow before losing by the same score on Merseyside, and were eventually eliminated by

Erik Lamela's 79.5% rate of passing accuracy against Anzhi was the lowest of all Tottenham's outfield players.

Since then, though, with expensive foreign stars like Samuel Eto'o, Willian and Yuri Zhirkov all sold off.

By contrast, Tottenham spent the summer bringing in talent after and Defoe, Holtby and former Roma playmaker Erik Lamela were among those in the line-up after not starting the weekend's draw with Chelsea.

However, the home side, and Pavel Solomatin in particular, made the brighter start, with the striker wrongly flagged offside before forcing Vlad Chiriches into a stretching recovery tackle.

Initially Tottenham could not translate possession into clear-cut chances, but once Holtby slid the ball through the Anzhi rearguard for Defoe to emphatically hammer into the roof of the net, the Premier League side were always in control.

Six minutes later Walker encountered little opposition as he advanced down the left before setting up summer signing Chadli to steer in his second goal for the club.

Defoe missed a chance to press his case for promotion into manager Villas-Boas's first-choice XI when he swiped thin air as the ball ran loose in the box.

Anzhi striker Traore, who signed from Kuban Krasnodar for a reported fee of £15.1m in February 2011 and is expected to join the exodus from the club in January, occasionally raised the encounter's sluggish tempo after coming on at the break.

The Ivory Coast international combined well with fellow substitute Andrei Eschenko to force Hugo Lloris into a hurried block with his shins and the Tottenham goalkeeper was stretched by Solomatin's smartly-hit effort shortly after.

But Tottenham secured victory without raising their game far beyond exhibition pace and their main concerns as the clock ticked down were a minor injury to Younes Kaboul and Lamela's indifferent performance before he was withdrawn in favour of Gylfi Sigurdsson.