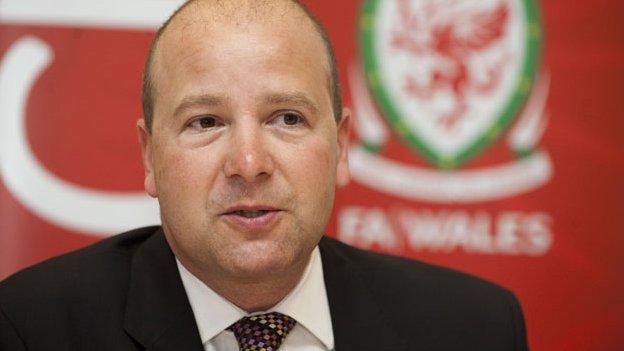 A review of the way Welsh football is run has recommended introducing an age limit for members of the Football Association of Wales.

The review, published on Tuesday, suggests people standing for election to the FAW council in 2016 should be no more than 70, reducing to 65 in 2020.

It also recommends the creation of an executive board to look after the running of the sport.

Any changes would have to be approved by the FAW council.

There is currently no age limit on membership of the ruling council, with its oldest member, Tommy Forse, in his nineties.

It is understood FAW chief executive Jonathan Ford is keen to push through the reforms.

The review was commissioned by the FAW in 2011 and published on the Welsh Assembly Government's website on Tuesday, 1 October.

They conducted interviews with three former Wales team managers, and interviewed a broad range of football administrators, including Fifa and Uefa executives.

The report says perceptions of the FAW included:

The review also highlighted other problems during the decision making process within Welsh Welsh football, including:

The FAW was at the centre of a row in June when Barry Town Utd AFC and Llanelli were refused membership of the association.

An appeal for a reprieve initially failed when the FAW council invoked standing orders to refuse to discuss the matter at a special meeting which had been called to discuss the clubs' re-instatement.

However, Barry were eventually re-instated after taking legal action against the governing body.

The review makes a total of 88 recommendations, including changes to the committee structure, disciplinary processes and the creation of an executive committee to look after the running of the game.

The FAW council would remain the "supreme body" of the association, but meet four times a year instead of the current six.

The council are expected to discuss the review in their October meeting, but a decision on whether to implement its recommendations is not expected to be made at that meeting.