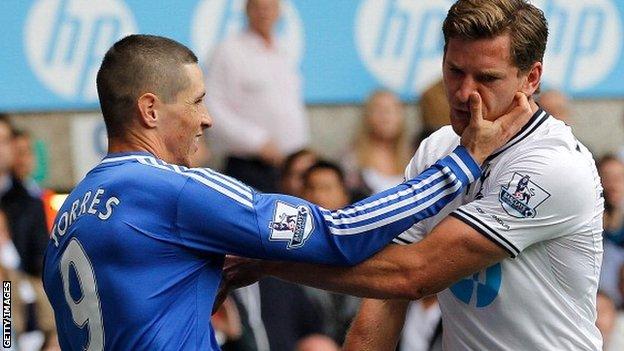 The Football Association reviewed the incident after the Spaniard was captured on TV scratching the defender.

But a match official had already seen the players collide which means, under FA rules, no action can be taken.

The FA defends the interest and the culture of English football. It's not to protect cheats and people that simulate

The 29-year-old will serve a one-match ban after being sent off in the 82nd minute for two bookable offences.

Torres faced the prospect of his one-match ban being extended to four if he was found guilty of violent conduct.

The FA is trialling a new disciplinary system this season, which sees a panel of three former referees reviewing an incident and deciding whether charges should be made.

Under the old system, action was only taken if a referee viewed the footage and judged whether a player should have been sent off.

But, under both systems, the FA cannot take further action if a match official witnesses part of the incident.

The FA said in a statement: "One of the match officials saw the coming together of the two players, albeit not in its entirety.

Torres received his first caution in the 50th minute for tripping Vertonghen and then dug his fingernails into the defender's face and neck.

The striker was then sent off following an aerial clash with the Belgian.

On Saturday, Chelsea manager Jose Mourinho called Vertonghen "a disgrace" for his role in Torres's dismissal.

And speaking after on Tuesday, Mourinho added: "It was quite a real pressure to make him have a two or three-match ban, but at the same time I was more than confident.

"The FA defends the interest and the culture of English football. It's not to protect cheats and people that simulate.

"To protect English football is to protect people who play the game with emotion, intensity. It didn't surprise me, what happened."

However, former Manchester United goalkeeper Peter Schmeichel drew comparison with an incident in April when Luis Suarez was banned for 10 matches for biting Chelsea's Branislav Ivanovic.

Schmeichel told BBC Match of the Day 2 Extra: "If Suarez had done that people would have cried for another 10-game suspension.

"I see no difference in biting a player and scratching a player. You cannot raise your hands in modern day football."

Torres will be unavailable for Sunday's Premier League match with Norwich at Carrow Road.