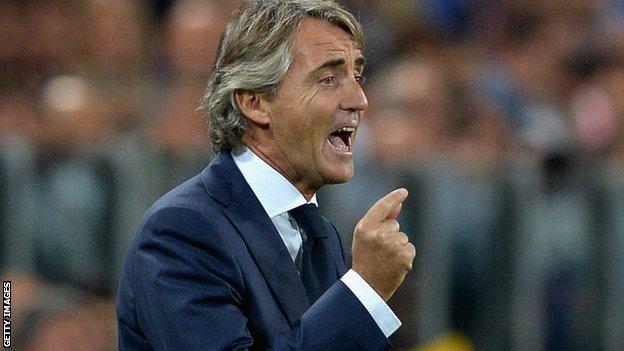 Former Manchester City boss Roberto Mancini saw his Galatasaray side snatch a dramatic 2-2 draw against Juventus during his first match in charge.

The Turkish side led through former Chelsea striker Didier Drogba's first-half goal before Arturo Vidal equalised from the penalty spot.

Juventus went ahead through Fabio Quagiarella but the lead lasted just a minute as Umut Bulut grabbed a point.

The goals were his 25th and 26th in his last 21 Champions League games as Madrid kept up their 100% record.

Ronaldo could not complete his 22nd hat-trick for the club but Angel Di Maria also scored twice to complete a comfortable victory.

Madrid, who were without the injured Gareth Bale, now sit top of the Group B table four points clear of Juventus.

But the second place is wide open with just one point separating the Italian side, Copenhagen and Galatasaray.

A goal in injury time from Jens Hegeler earned Bayer Leverkusen a 2-1 win over Real Sociedad.

Sami Hyypia's side led through a Simon Rolfes goal on the stroke of half-time before former Arsenal striker Carlos Vela equalised.

The winning goal means Leverkusen now have three points, just one less than Manchester United and Shakhtar Donetsk, who drew 1-1 on Wednesday.

Kostas Mitroglou made history when he became the first Greek player in the history of the Champions League to score a hat-trick, in Olympiakos's 3-0 win over Anderlecht.

The 25-year-old striker scored his first of the night after 17 minutes and added two more in the second half to give the Greek side their first points of the group stage, although Anderlecht did miss a penalty with the score at 1-0.

"You never expect to win 3-0 away in the Champions League,'' Olympiakos coach Michel Gonzalez said. "Mitroglou was in great form, but he wasn't the only exceptional player."

The Greek side now sit second in the table behind Paris St-Germain who kept up their 100% record with a 3-0 win over Benfica.

"PSG showed the power of their financial investment," said Benfica coach Jorge Jesus. "Last season they were knocked out by Barcelona without losing and they will compete to win the tournament this season."

In the early kick off, CSKA Moscow beat Viktoria Plzen 3-2 thanks largely to a remarkable own goal by Plzen defender Radim Reznik - although all the blame has to go on goalkeeper Matus Kozacik.

The defender rolled the ball back for the keeper to clear but somehow Kozacik missed the kick and it rolled into the open goal.

Moscow sit level on points with Manchester City but three points behind leaders Bayern Munich who kept up their winning start with a 3-1 victory over Manuel Pellegrini's side.