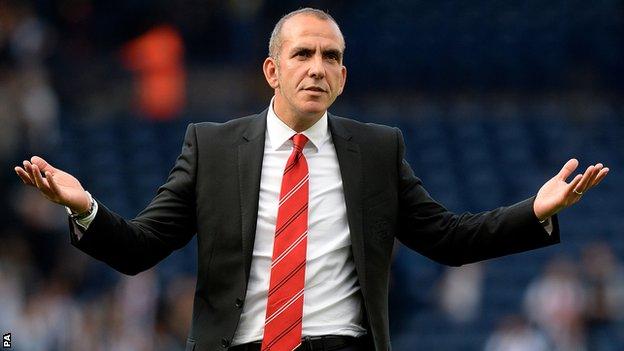 Former Sunderland manager Paolo Di Canio insists his sacking was not a result of a training ground row with his players.

The Italian, 45, was sacked on 22 September with the Black Cats bottom of the Premier League table.

"There was no training ground bust-up as some are reporting," said Di Canio.

"Many of the players have since sent me messages thanking me for my time as their manager and helping them to improve as footballers."

Di Canio replaced Martin O'Neill at Sunderland on 31 March and guided them to Premier League safety as they won two of their final seven games - including a 3-0 win at rivals Newcastle.

The Italian brought in 14 players over the summer but Sunderland struggled at the start of this season, losing four of their first five league games.

"When I joined the club last season with the aim of saving them from relegation, I was happy to be offered the opportunity to manage in the Premier League," added Di Canio.

"I walked into a challenging situation but achieved what I was asked to do, the highlight of which was the fantastic performance and win against Newcastle, which is something I will always remember.

"We could see that results had not gone as well as any of us had hoped [this season], but I felt as a team we could turn things around."

During his spell at Sunderland, Di Canio was often criticised for his treatment of players.

He publicly criticised members of his squad at the end of last season, and accused some of his players of "not having the right desire" after the 3-1 defeat to Crystal Palace in August.

Di Canio's last game in charge of Sunderland was a 3-0 loss at West Bromwich Albion on 21 September, a result that prompted him to walk over to the away end at the Hawthorns and make 'chin up' gestures.

He was sacked the following day after players approached Sunderland's chief executive Margaret Byrne to complain about him.

"I remain confident in my ability and I want to manage again in England as soon as I can," Di Canio said.

"When things like this happen, it is important to take something positive from it. I have learned a lot from my brief time at Sunderland and I am sure that this will only make me a better manager in my next job."