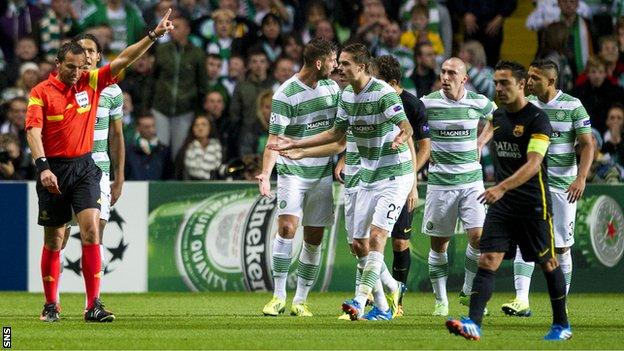 Brown appeared to kick the Brazilian after tripping him during Barcelona's 1-0 win in Glasgow.

"I think the sending-off was harsh. He had a little flick out at Neymar and the frustrating thing is that he gave the referee a decision to make. Neymar sucked the referee in. A few Barcelona players went down very easily and make the most of every situation, and it cost Celtic the game."

"I don't think Neymar does himself any favours by the way he behaves at times," Lennon said.

Celtic are bottom of Group H having lost their opening two matches of the campaign, while Barca lead the group on maximum points.

Cesc Fabregas's 75th-minute header secured all three points for the Spanish side, but Lennon thought the outcome of the Group H match hinged on Brown's dismissal.

"There was a lot more going on in the game that warranted heavier punishment, so it was a game-changing decision," he added.

"The sending-off is uncalled for and unnecessary. It's very soft. I have looked at it; if there was any contact it was minimal."

The first half was short on chances but, despite going down to 10 men, Celtic managed to create two excellent chances before Fabregas struck.

Second-half substitute James Forrest forced Barcelona goalkeeper Victor Valdes into a fantastic save with a shot from 14 yards before Charlie Mulgrew sent a downward header wide from the resulting corner.

"It's very difficult playing against Barcelona with 11 players but with 10 it's even more difficult. But we played very well tonight," added Lennon.

"Our supporters are very respectful of great players. Andres Iniesta walks off the pitch to a standing ovation from the Celtic support. Neymar, after the incident, gets booed every time he touches the ball by our support."

It was only Celtic's second home defeat in the group stages of the Champions League, the first also having come at the hands of Barcelona in 2004.

Lennon, whose side face Ajax at home in their next Champions League match, admitted Brown should have known better than to risk getting sent off.

"Possibly," he said. "There is a debatable point there. But again, having reviewed it, I didn't think there was very much in it.

"There's no question it was a foul. The referee was going to book Scott for the initial foul. Then the tap, if you want to call it that - is it dangerous play? I'm not so sure."