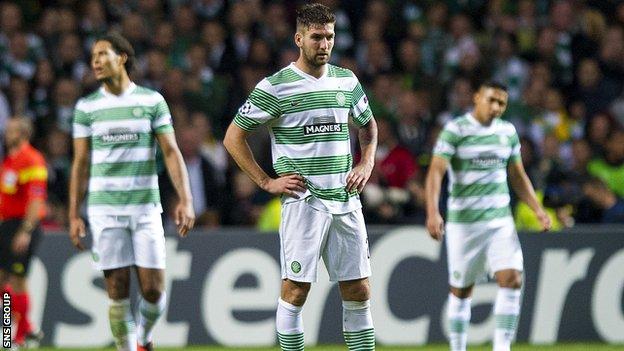 One win over Barcelona is rare enough. A second for Celtic in the space of a year was just too much to ask.

In truth, there was little to suggest that a repeat of last season's 2-1 victory was ever on the cards, but it did appear as though Celtic might just be able to grind out a draw before Cesc Fabregas finished off a slick move on 75 minutes.

Time and time again, the Barcelona attack faltered in the trenches that had apparently been dug round the Celtic penalty area.

No-one knows whether they would ultimately have been breached had Celtic kept 11 men on the pitch, but there was plenty of evidence to suggest they would not.

This was not a brilliant Celtic performance. Manager Neil Lennon accepted as much in the post-match media conference when he acknowledged his side's inability to retain possession.

But it was a dogged and well-organised one, which frustrated the visiting superstars and meant goalkeeper Fraser Forster - often Celtic's best performer on this Champions League stage - was really only troubled once the Catalans had a numerical advantage.

For that, Lennon deserves enormous credit. He would have preferred plaudits for a performance full of swagger and skill, but success does not always depend on such qualities.

In this case, though, achievement can only be measured in commodities like commitment and organisation rather than the much more valuable cargo of points.

As for the assertion made by Lennon and others that this Celtic squad is better than last year's, it is difficult to agree.

The most keenly felt absence was that of Victor Wanyama. Last season, he did not look out of place in a midfield battle with Xavi and Iniesta.

Scott Brown, who was sent off on the hour for what Lennon called a 'tap' at Neymar, and Charlie Mulgrew, who missed a glorious headed chance, put in a power of work, but lacked the composure and class offered by Wanyama in such illustrious company.

Virgil van Dijk has stepped comfortably into Kelvin Wilson's boots at the back, but it says much about the calibre of player Lennon was able to purchase in the summer that none of the others started.

Of course, the Celtic manager must talk up the relative strengths of his side, but the club's failure to buy a higher calibre of player than they did could be the difference between reaching the last 16 of the Champions League and having to settle for the Europa League or perhaps going out of Europe altogether.

And so what of Barcelona? Despite the absence of the injured Lionel Messi, this was a better all-round performance from the Catalans than the one they produced last season.

"I think the sending off was harsh. He had a little flick out at Neymar and the frustrating thing is that he gave the referee a decision to make. Neymar sucked the referee in. A few Barcelona players went down very easily and make the most of every situation, and it cost Celtic the game."

And yet their failure for long spells to puncture Celtic's doughty defence hints at a continuing reliance on the Argentine's genius, something coach Tata Martino sought to play down afterwards.

Their impeccable start to the season suggests otherwise, but this does not yet appear to be a Barcelona side firing on all cylinders.

Yes, at times their passing and ball-retention was a joy to behold, but are they ready to claw back their Champions League crown from Bayern Munich? I'm not so sure.

They will emerge from this group with ease, but much sterner tests lie ahead and they may not yet be equipped to pass them.

For Celtic, the forthcoming double-header against Ajax could determine where their immediate European future lies.