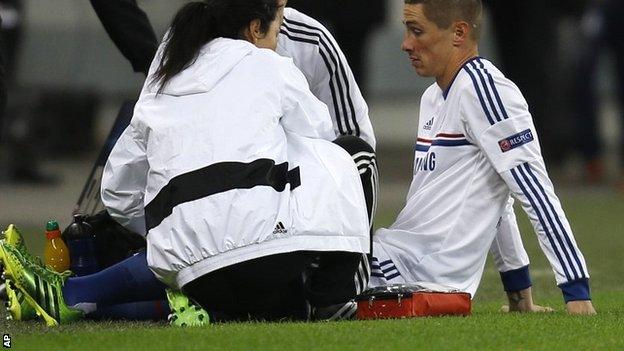 Chelsea striker Fernando Torres will be out of action for three weeks after injuring his knee in the Champions League win at Steaua Bucharest.

The 29-year-old was substituted 11 minutes into Tuesday's match, with scans showing he suffered medial ligament damage to his left knee.

Torres was already ruled out of Sunday's game at Norwich after he was sent off at Tottenham.

He will also miss Spain's World Cup qualifiers against Belarus and Georgia.

After the international break, Chelsea host Cardiff on 19 October before travelling to Germany to face Schalke in the Champions League on 22 October.

The Football Association confirmed on Tuesday that Torres would face no extra punishment after his tussle with Tottenham defender Jan Vertonghen at White Hart Lane, a decision Spurs manager Andre Villas-Boas called "a disgrace".

Speaking about Torres's enforced absence, Chelsea boss Jose Mourinho said: "It's a pity for the guy because he's in a very good moment."

Torres scored 65 goals in 102 Premier League appearances for Liverpool but struggled after joining Chelsea for a British record fee of £50m in January 2011, scoring six league goals in the remainder of the 2011-12 season.

The Spaniard netted 23 times in all competitions last term but has yet to score in the current Premier League campaign.

His only two goals to date have come in the Uefa Super League and Capital One Cup.

Former Liverpool and England midfielder Jamie Redknapp believes the striker demonstrated at the weekend that he could yet recapture his Anfield form.

Writing in the Daily Mail, Redknapp described Torres's performance against Spurs as "a show of quality centre-forward play", adding: "He was a great striker; maybe he still can be."