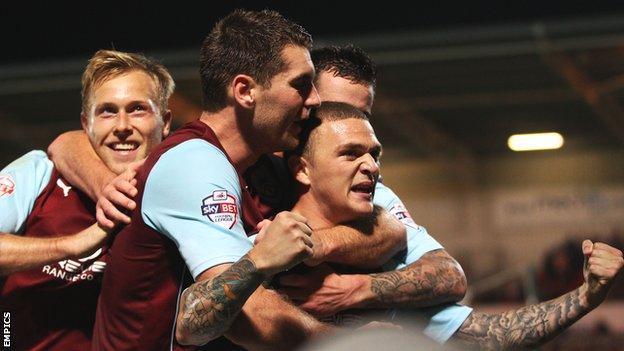 Manager Sean Dyche believes his Burnley side can cope with the pressure of going top of the Championship.

A 2-0 win at Doncaster on Tuesday, their seventh victory in 10 league games, sent the Clarets to the summit.

But, given their excellent start to the campaign, boss Dyche told BBC Radio Lancashire that his team have been seen as a scalp for some time.

"People have been recognising us as a fair side already. I think the players are getting used to that," he said.

Sam Vokes has scored seven goals for Burnley in the Championship this season.

His previous best tally in a second-tier campaign was six in 2008-09 -a season in which he helped Wolves to the title.

"There's been a lot of good things said about us for the last five or six games."

Expected by some to struggle this season, especially having to QPR, Burnley have been fighting towards the top of the table.

Sam Vokes, who netted his seventh goal of the season at the Keepmoat Stadium, and have been in fine form up front, but Dyche says Burnley's rise has been a collective effort.

"I admire the way they're going about it," added the former Watford manager.

"People don't see the work we put in with them in training and they've been terrific.

"From the first minute they walked in, there's been a brilliant mentality towards being a team and what it takes to be a team.

"The next challenges are to make sure we keep them fit, and what happens if one or two do get away from us.

"That's when the mentality is really tested and when our resolve as a group is important."