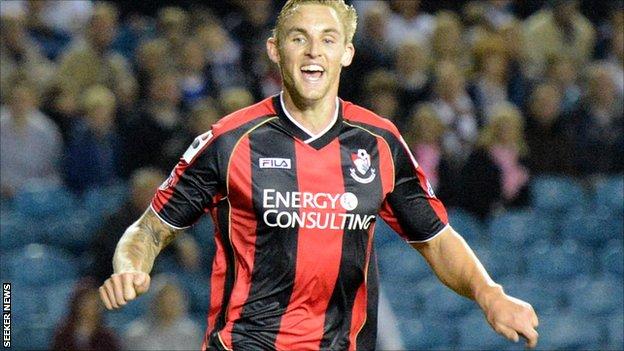 West Ham midfielder Jack Collison says he hopes he can use his month on loan at Bournemouth to force his way back into Hammers boss Sam Allardyce's plans at Upton Park.

Collison, 24, completed his move on Tuesday and made his debut for the Cherries in their 2-1 defeat at Leeds.

And he intends to prove he still has something to offer Allardyce.

"Hopefully I can do well and give the manager at West Ham a few headaches," Collison told BBC Radio Solent.

Collison has made five appearances for club and country this season and 21 last term after a seven-month lay-off with a knee injury.

But he was not in West Ham's squad at the weekend so was grateful when the opportunity to go out on loan came about.

"It's a fantastic club on the up and obviously I hope I can help them [Bournemouth] and they can help me and it will be a partnership made in heaven," he said.

"I haven't been involved with West Ham as much as I would like so this is an opportunity for me to show what I can do.

"I believe in myself and hopefully I can do well for Bournemouth.

"We played them in pre season, they had a fantastic season last season, are a team on the up who like to pass the ball and who have fantastic individuals and hopefully I can slot in and do my best.

"It's a chance for me to come and play some football, I want to do my best for the team and we'll see what happens at the end of the month."