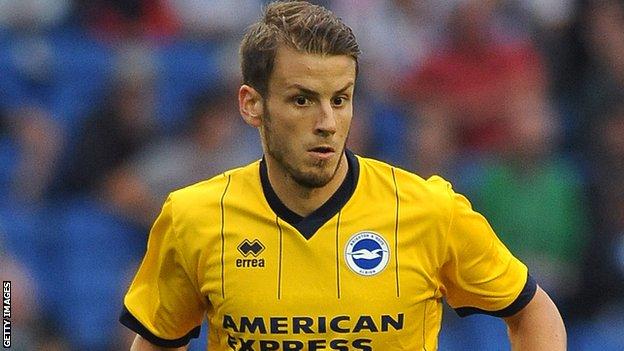 The 29-year-old has been out since the end of August with a knee injury which required surgery.

He told BBC Sussex: "I am working really hard. It is three weeks after the operation and I am looking at three or four more weeks to be back.

"I don't want to set a date, but probably November. I don't know if it will be early or late in November."

We tried to avoid the operation but it wasn't possible. The piece that was torn has been removed so it will not give me any problems in the future

He added: "To be sitting on the bench and watching the players is quite difficult.

"You can see them enjoying training and games and you are not part of it.

"You are part of it with your heart, but not with your legs. Hopefully I will be back with them soon."

The Spaniard scored seven goals in 38 appearances for the Seagulls last season after joining from Swansea on transfer deadline day.

However he has spent the majority of this campaign on the sidelines after sustaining a cartilage problem in the opening day defeat at Leeds United.

"It has been frustrating for me this year as I have only been able to play a game and a half in not really good conditions," he said.

"After three minutes at Leeds I went for a cross and heard a crack in my knee.

"I kept going and it was fine after the game but as soon as I got off the bus back in Brighton my knee was swollen and very painful.

"We tried to avoid the operation but it wasn't possible. I had to do it as my meniscus was torn.

"It was a good thing to do at this stage of the season and be ready for the push. The piece that was torn has been removed so it will not give me any problems in the future."