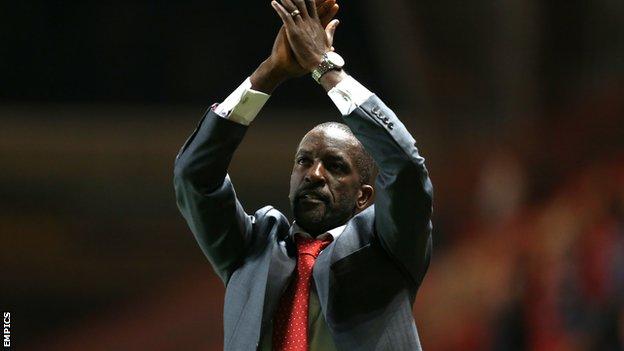 Charlton Athletic manager Chris Powell says their performance in the 1-1 draw at home to Nottingham Forest ranks as their best of the season.

The point on Tuesday brought an end to a run of three successive defeats.

He told BBC London 94.9: "I am really ecstatic with my team because they have given everyone a response and a glimpse of what they can do.

"It was only a point but it was a moral victory in some respects. They were very brave."

The Addicks went behind within three minutes to Andy Reid's goal but Marvin Sordell equalised after the break as the south east London side registered their first point since the draw at Watford last month.

Powell praised the club's fans for their support at The Valley and hailed the application of his players.

"I have got to say the fans were magnificent as we haven't given them much recently," the former England left-back said.

"For us to perform the way we did, with 20-plus chances, and come back from that start and show everyone what they were made of - there was a lot of pride from my players.

"We had lost three games and were playing a side who have been flying but we made them second best.

"We have got to build on that and make sure we keep at those levels. The crowd will go home thinking they are proud of every single player who wore red."

Charlton have only won one league game this season and are one point above the Championship relegation zone.

"You have always got pressure being a football manager," Powell said.

"I know the business and of course you want to get results. Even though we are struggling with injuries I don't want to use that as an excuse.

"Sometimes you have to just get on with it and that is what we have done.

"When you are losing games everyone looks at myself and I have got to accept that. Even though it will be an up and down season I just want us to make sure we do ourselves justice."