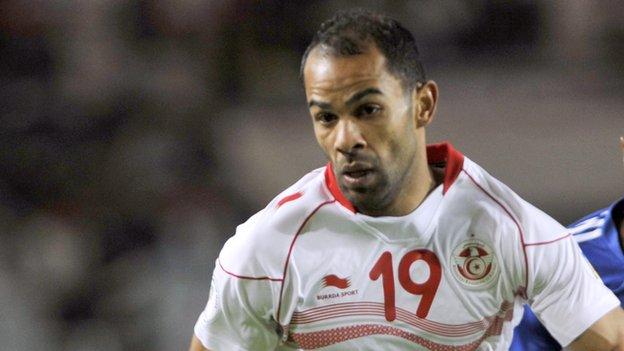 Tunisia have recalled key striker Saber Khalifa in a 26-man squad for the World Cup qualifying play-off first leg against Cameroon in Tunis.

That defeat was overturned by Fifa, who ruled Cape Verde had fielded an ineligible player, giving Tunisia their place in the final round of qualifying.

Ruud Krol will coach the team for the first time, in his role as caretaker.

The Dutchman, who remains the coach of Tunisian side CS Sfaxien, took over from Nabil Maaloul when he resigned after Tunisia's defeat by Cape Verde on 7 September, which had initially seen them eliminated.

Krol has brought in attacking midfielder Maher Hannachi and striker Fakhreddine Ben Youssef, who he manages at Sfaxien.

But key defenders Karim Hagui and Aymen Abdennour are both suspended.

And midfield pair Youssef Msakni and Oussama Darragi, who both played in the last qualifier, have been omitted from the squad.

Tunisia host the first leg on 13 October with the return match in Yaounde on 17 November.

The aggregate winners qualify for next year's finals in Brazil.