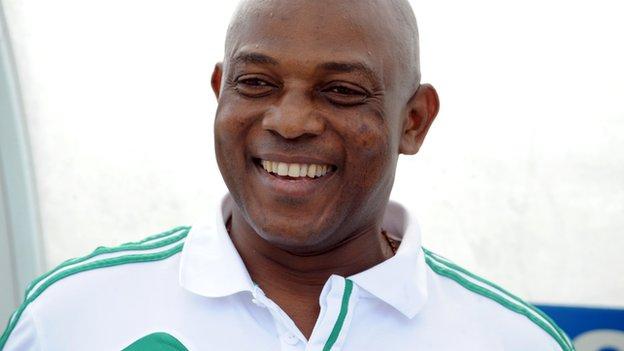 Nigeria coach Stephen Keshi has been warned by Fifa over his future conduct following his comments about former Malawi coach Tom Saintfiet in August.

The Malawi Football Association (FAM) had reported Keshi to Fifa after he called the Belgian "a white dude who should go back to Belgium".

FAM alleged the comments, which came ahead of the sides' World Cup Group F qualifier in September, were racist.

Fifa said it would "impose sanctions if such incidents happen again".

"If such incidents should happen again, the Fifa Disciplinary Committee will be left with no other option than to impose sanctions against the coach, Mr Stephen Keshi."

Keshi and Saintfiet became embroiled in a row after the Belgian said the qualifier should be moved from the Nigerian city of Calabar on security grounds.

It escalated when Keshi reacted angrily to Saintfiet's suggestion that Calabar is not safe.

The match went ahead in Calabar on 7 September and Nigeria won 2-0, sending them through to the final round of African qualifying for next year's tournament in Brazil.

The African Champions will face Ethiopia in Addis Ababa on 12 October for the first match of the two-legged tie, with the return in Calabar on 16 November.