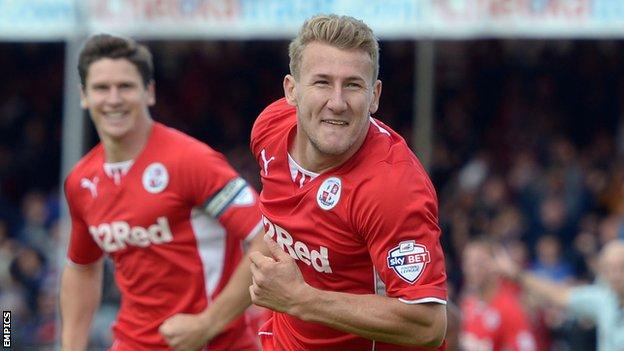 Crawley Town defender Kyle McFadzean says he has learnt from the mistakes which saw him to leave hometown club Sheffield United.

The 26-year-old walked out on his contract at Bramall Lane shortly after his sole first-team appearance in 2005.

"I do blame myself and it was my fault. I walked out and said I didn't want to go back," he told BBC Sussex.

"They wanted me back but after four months it was a bit too long. I do regret it but look at where I am now."

McFadzean came through the academy at Sheffield United and made his first team debut in a League Cup tie in September 2005.

He says his departure from the South Yorkshire club was because he "fell out of love" with the game. He subsequently joined non-league Alfreton Town in the summer of 2007 before signing for Crawley in August 2010.

"I played in the cup and I was breaking into the first team but I started hanging around with the wrong people and the wrong crowd," he said. "It was the wrong time to fall out of football.

"I was only 18 and playing in the reserves every week.

"I even had Chris Morgan [former Sheffield United defender] ring my mum up asking me to come back. I never went back and I had two years left on my contract.

"I bounced back and I proved everyone I could come back. I have big thanks to Nicky Law, the Alfreton manager."

McFadzean returns to Sheffield United for the first time as a player on Friday, having missed Crawley's 2-0 victory at Bramall Lane last season with a serious virus which kept him out of action for about eight months.

"It will be an emotional night and I can't wait," the centre-back said. "I am a Sheffield United fan and it is one of my lifetime dreams to play for them.

"I wish I had stayed there but now I am here at Crawley I am loving it."