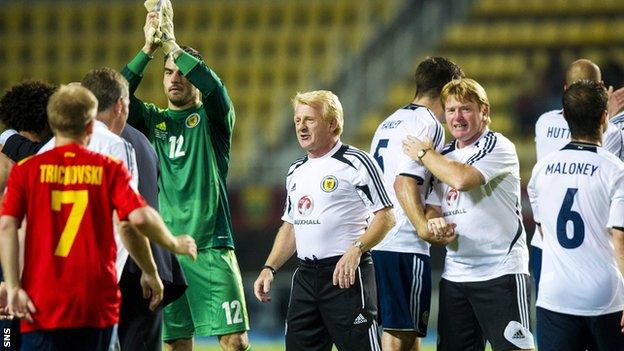 Shaun Maloney will miss Scotland's final World Cup qualifier against Croatia at Hampden on 15 October because of a back problem.

Steven Fletcher is another absentee, with the Sunderland striker recovering from a shoulder injury.

Full-back Steven Whittaker is suspended but goalkeeper Allan McGregor returns from a ban and injury.

Lee Wallace, Craig Bryson and Chris Burke retain their places after late call-ups for the last set of matches.

James Forest, who has just returned for Celtic following respiratory difficulties and sciatica, Jamie Mackie, Craig Samson and Craig Conway miss out having been selected for the games against Belgium and Macedonia.

George Boyd, James Morrison and Graham Dorrans withdrew through injury last month but return to Strachan's pool, along with striker Jordan Rhodes who missed the win in Macedonia with a broken hand.

Ikechi Anya, who scored the opener in Skopje in an impressive first Scotland start, will be hoping to win a third cap.

"He gives us that burst of pace that all good teams need," Strachan said of the Watford wing-back.

"He's a smashing fellow and he's excited about playing for Scotland."

In September, Scotland lost in Glasgow to group leaders Belgium and followed that with a 2-1 success in Macedonia, with Wigan midfielder Maloney curling in a last-minute free-kick.

Scotland's only other win in the campaign came in Zagreb in June when a solitary goal from Robert Snodgrass derailed Croatia's ambitions of topping the section.

Croatia must beat Belgium at home and win at Hampden to have any chance of winning Group A and progressing automatically to next year's finals in Brazil.

However, for Igor Stimac's team to succeed it would also require Belgium failing to beat Wales at home in their final match.

Croatia are already guaranteed a play-off place if they fail to overhaul Belgium.

Scotland sit fourth in the table and cannot catch Serbia due to their head-to-head record.

The Scots could still be overtaken by both Wales and Macedonia, who have two games to play, including a meeting in Cardiff.