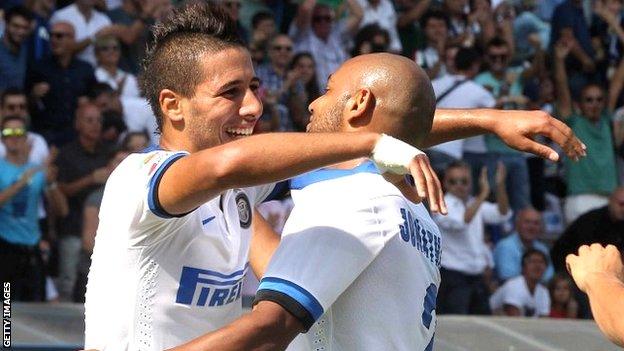 Inter Milan owner Massimo Moratti has signed a deal to sell a 70% stake in the Serie A club to a group led by Indonesian businessman Erick Thohir.

"The new partners' enthusiasm and pragmatism are certainly a guarantee for the future," said Moratti.

Thohir added: "Today is a truly special day in my life."

Inter Milan broke the transfer world record in 1999 when they paid £32m for Lazio striker Christian Vieri. The Vatican called the size of the fee "disgusting".

Moratti, who will retain a seat on the board, became Inter president in 1995 and has overseen five Serie A titles, one Champions League and a Uefa Cup.

His father Angelo Moratti was in charge of the club in the 1960s when Inter won the European Cup twice in successive years.

Inter, a loss-making club with debts of about 300 million euros (£254m), are the only Italian team never to have been relegated throughout their 105-year-long history.

"I think Inter history is going to be enriched by a new season thanks to our new international partners who, I am sure, will contribute to a continued string of successes," said Moratti.

"My family and I will continue to live this marvellous story together with Erick, Rosan and Handy granting our unchanged devotion and fondness that bond us to the club and to the Inter supporters".

Thohir said: "I am honoured that Mr Moratti has entrusted me with the responsibility to lead Inter into the next chapter, and I am excited to have him continue in the future as my partner.

"I am an entrepreneur, but first of all I am a supporter and a sports lover. I cannot wait to put our passion and international experience at the service of this fantastic club and its supporters."

Inter are fourth in Serie A under coach Walter Mazzarri. They finished ninth last season with Marco Stramaccioni at the helm and failed to qualify for Europe for the first time in 15 years.