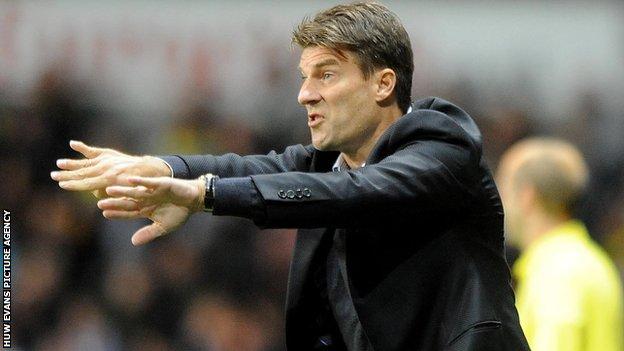 The Swiss side showed their mettle by beating Spartak Moscow in the qualifying round.

Laudrup wants to build on the Swans' 3-0 group win over Valencia in Spain.

"I'm looking forward to a difficult game for us and even if we are doing well we have to keep an eye on this spirit they have," said Laudrup.

St Gallen have only played one Premier League side in their history, eliminating Chelsea in the first round of the Uefa Cup in 2000.

We will have to try to control the game and we probably will, but always with an eye on their counter-attack

They also beat Russian side Kuban Krasnodar 2-0 at home in their opening Europa League Group A game.

"They [St Gallen] don't have the big stars but they are really working hard," said Laudrup.

"They were really underdogs against Spartak Moscow in the [Europa] play-offs.

"They were 1-0 down in Russia after 51 seconds and they were really out-played for 20 minutes and then suddenly after 35 minutes they were 3-1 up.

"So it shows a lot of character in this team.

"They play a little different from us, a bit more direct.

"We have to be careful. We are the home team. We will have to try to control the game and we probably will, but always with an eye on their counter-attack and team spirit."

Laudrup has concerns about St Gallen, who went on to beat Spartak 5-3 on aggregate, even though his side pulled off a famous win in Valencia to make the Swans favourite to win Group A.

Some pundits even installed Swansea as favourites to win the tournament.

But the Dane takes a more realistic view: "We had a fantastic start beating the top favourites on their ground 3-0.

"[But] just because we win one game - even if it was Valenica away - it doesn't make us favourite for anything.

"If we keep this level we could move on to the knockout phase but even then there will be 32 teams."

And the club could be stripped of the services of Angel Rangel, who is being monitored by the club's medical team after injuring an ankle in training.