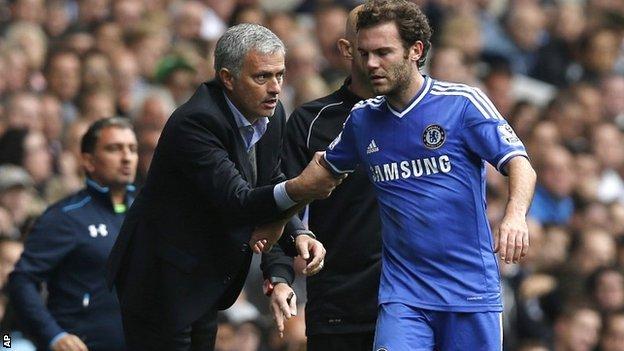 Chelsea playmaker Juan Mata says he is happy to adapt to boss Jose Mourinho's new tactics after winning his place back in the side.

Mata has started just four of Chelsea's 10 matches this season despite being named as the club's player of the year in the previous campaign.

"I have to do this," said Mata, 25, of adjusting to Mourinho's demands.

"I will try to improve, score goals, assist and do what I have to do. I'm not the kind of man that gets down."

Juan Mata scored 20 goals in 64 games last season for Chelsea and was nominated for the PFA and Football Writers' Player of the Year awards as well as winning the Blues award.

This season he has made six appearances for his club and is yet to score.

In September Mourinho had called on Mata to "adapt to different realities" and "transform a few things in his game", suggesting that he needed to carry out more defensive work than had been expected of him in previous years.

"I just keep going, train well and prepare for every game," Mata added.

"It's important to play with the ball and without the ball, but I'm very happy and looking forward to playing a lot of games throughout the season."

In July, in their ultimately unsuccessful pursuit of Manchester United striker Wayne Rooney.

Mata, who has scored eight goals in 29 international appearances, is in contention for a place in Spain's squad for their World Cup defence in Brazil next summer.