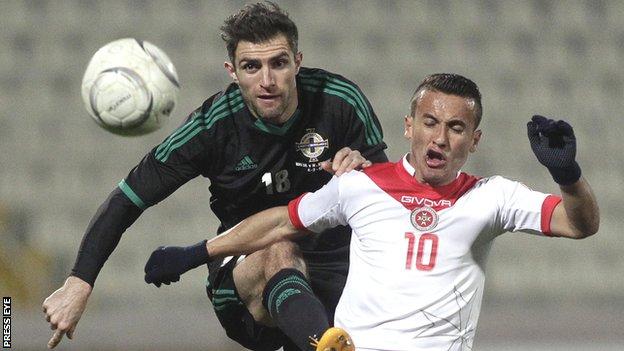 Northern Ireland defender Aaron Hughes has been ruled out of the World Cup qualifiers against Azerbaijan and Israel because of injury.

The Fulham player, 33, was hurt during training and Bradford City's Rory McArdle comes in as his replacement.

Chris Brunt, Chris Baird and Sammy Clingan return but there is no place for Barnsley winger Paddy McCourt.

Striker Kyle Lafferty is banned for the Azerbaijan game and is on standby for the Tel Aviv clash with Israel.

Brunt returns from suspension while QPR midfielder Baird is named in the squad after being drafted in as a replacement for the defeat to Portugal and the humbling at the hands of Luxembourg.

"Really pleased to be back in the international set-up again," Clingan said on Twitter.

Northern Ireland take on Azerbaijan in Baku on 11 October and finish the campaign against Israel four days later.

O'Neill's team are fourth in Group F, ahead of Luxembourg on goal difference and a point clear of bottom side Azerbaijan.