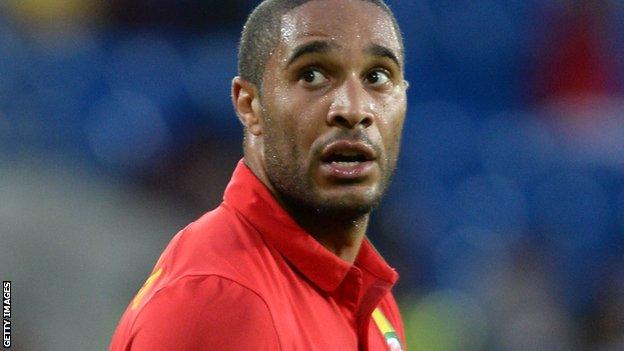 Ex-Wales winger Leighton James says captain Ashley Williams should be rested for the World Cup qualifiers with Macedonia and Belgium.

Williams is out of Swansea's Europa League tie with St Gallen.

The 29-year-old is unlikely to face Southampton on Sunday and James believes he should rest his injured ankle during the international break.

"Swansea City in this moment in time in terms of Ashley Williams [are] far more important than Wales," he said.

Coleman's side are currently bottom of Group A, with two wins from eight matches.

Maybe Ashley needs that little bit of a break to recharge his batteries, to give his ankle injury a good long rest

Swansea boss Michael Laudrup has urged Coleman to prioritise the defender's long-term fitness and not to play him in both games.

And James, the former Swansea City player who won 54 caps for Wales, says Williams should be excused for the final two games of the World Cup qualifying campaign.

"If it was the first and second game of a qualifying group for Wales then I might change my mind," James told BBC Radio Wales Sport.

"But let's be brutally honest about it, we've got no chance of qualifying, haven't had for quite a while.

"Ashley Williams is a vitally integral part of Swansea City's season [and] future. For me it's what is commonly called a no-brainer."

Williams picked up an ankle ligament injury in the 2-2 draw with Liverpool and has played just once in the intervening period, against Crystal Palace.

Thursday's Europa League game against Swiss side St Gallen at the Liberty Stadium will be the third game in a row Williams will have missed.

Swansea resume their Premier League campaign following the international break at home to Sunderland on 19 October and James, the former Wales and Swansea City winger, feels the break would benefit Williams and his club.

"Maybe Ashley needs that little bit of a break to recharge his batteries, to give his ankle injury a good long rest and come back after the international break refreshed and back to being the Ashley Williams we know."