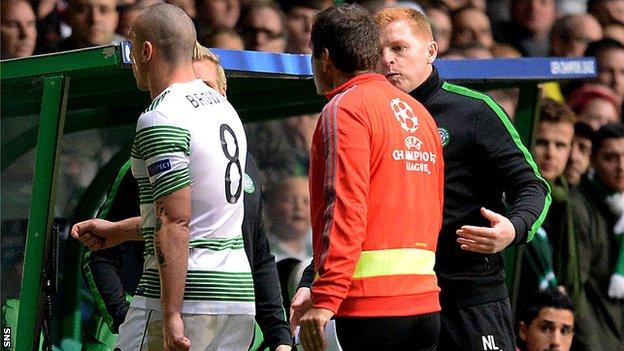 Celtic captain Scott Brown has admitted he "made a mistake" in getting sent off against Barcelona but still believes the decision was "harsh".

Brown appeared to kick Neymar after tripping him during Tuesday's 1-0 Champions League defeat at Celtic Park.

"It's something that happened in the heat of the moment but I shouldn't have acted in this way," Brown, 28, told the Celtic website.

"I need to live with that and there is no-one more disappointed than me."

Brown will automatically be suspended for the home tie with Ajax in a fortnight, although Uefa's control and disciplinary body has the power to extend the ban on review.

Celtic manager Neil Lennon has supported his captain, claiming the red card was "very soft" and criticised Neymar's reaction to the foul from Brown.

"There wasn't a huge amount of contact at all, to be honest, but I have to accept responsibility for my actions - and I do," said Brown.

"I still think it was a harsh decision. However, I recognise that I made a mistake and put myself and my team-mates in a difficult position."

Brown believes his team deserved to get something out of the game against "one of the best sides in the world" and remains positive about Celtic's Champions League prospects.

"We have four games to go in this group and everyone in the squad firmly believes we can still qualify," he added. "We are determined to get our first points on the board against Ajax in two weeks' time."