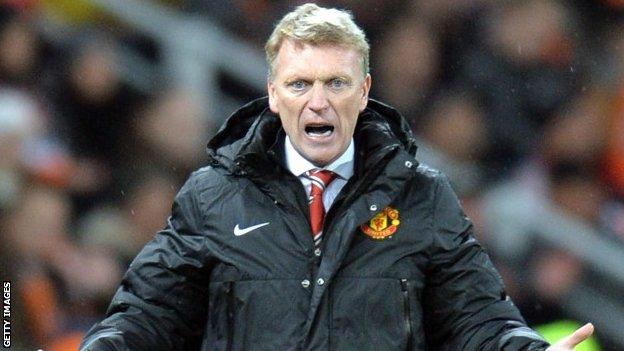 David Moyes said he was satisfied with a point as his Manchester United side drew 1-1 at Shakhtar Donetsk to stay top of Champions League Group A.

United took a first-half lead through Danny Welbeck but were denied victory by Brazilian forward Taison who equalised 14 minutes from time.

"It was a good point in the Champions League coming here," said the manager.

"We stood up well and got a good goal early doors. I thought we looked as if we were going to stop them scoring."

Shakhtar fared little better in front of the United goal, although they came close to snatching a winner when Taison's fierce shot from the left took a wicked deflection which almost caught out goalkeeper David De Gea.

"It's a point in the Champions League, it doesn't take us any further just now," added Moyes.

"We have to win other games if we're going to progress further in this competition.

"But I think on paper this looked a hard away tie and we've picked up a good point."

Shakhtar had won all three of their previous Champions League fixtures against English opposition in Donetsk, beating Chelsea in 2012-13 and Arsenal in 2000-01 and 2010-11.

"I don't think many teams come here and get three points," added 22-year-old England striker Welbeck, who played out wide against Shakhtar. "Today we would have liked to have got three points but it wasn't to be."

Meanwhile, Moyes paid tribute to 39-year-old midfielder Ryan Giggs, who came on in the second half to play in his 145th Champions League game - beating the appearance record of retired Spanish forward Raul.

"He was always going to be needed tonight because of his experience," added the United boss.

"And he became the player who has played the most number of matches in the Champions League, which is incredible."

"We allowed Manchester to score an early goal after a series of mistakes in defence," said the 68-year-old Romanian, who has been in charge of the club since 2004.

"We had to chase them down to put pressure on them so we could equalise. In the late stages we took more risks but luckily we managed to score.

"I consider the draw to be a fair result, which gives both sides good chances to make it into the knockout stage."

United now face a double-header against Real Sociedad, who currently prop up Group A with no points from two games following defeats by Shakhtar and Bayer Leverkusen.