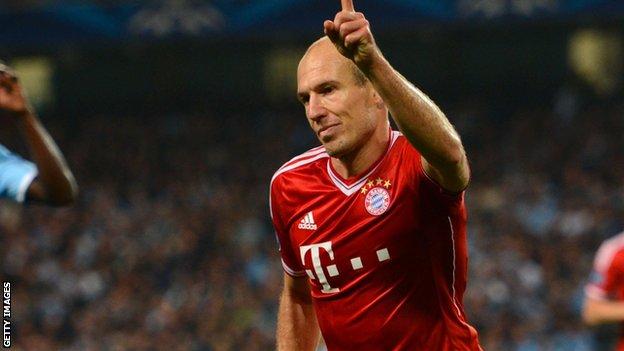 Goals from Franck Ribery, Thomas Muller and Robben put Bayern in control at Etihad Stadium as the holders

Arjen Robben has scored in the last five Champions League games, including the winner in last year's semi-final and final

Robben said: "We were so dominant against a big team in Europe. We didn't expect an easy game like that.

"It is a compliment to our team but we expected more from City."

Pep Guardiola's side were dominant in Manchester, ending the game with 66% of possession despite having Jerome Boateng sent-off with five minutes remaining after Alvaro Negredo had scored a consolation goal for the home side.

Robben netted for a fifth consecutive Champions League game to wrap up the win on the hour mark and the former Chelsea man was surprised at how little City offered going forward.

He said: "The first 70 minutes we played some terrific football.

"We didn't give them any space, we pressed them right up to the goalkeeper and they just kicked it away. Sometimes they gave us too much space and we use space well.

"City weren't as organised defensively as we had expected but there were some attacks of ours that simply were fantastically executed.

"When things go your way like that, it's a lot of fun out on the pitch, especially against a quality team like City."

England goalkeeper Joe Hart was beaten at his near post by Robben's goal, and could have done better with Ribery's opener, but City boss Pellegrini chose to blame the whole team for a poor display.

"I will talk about the team, not individuals," Pellegrini said.

"We played really bad, it's not the team we've seen every week in the Premier League and I think that was the worst thing.

"We didn't have possession and we didn't do enough to have more.

"The difference between City and Bayern Munich may not be what we saw here. There are a lot of reasons why this happened and it's important for me to find solutions to that."