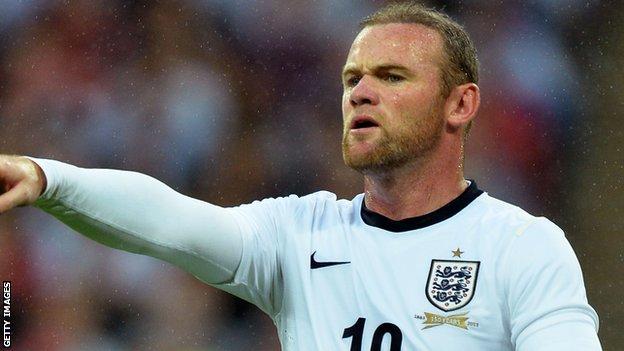 Wayne Rooney will be fit for England barring any problems playing for his club at the weekend, Manchester United manager David Moyes has confirmed.

The 27-year-old striker missed Wednesday's 1-1 draw with Shakhtar Donetsk with a shin injury.

England face Montenegro and Poland in their final matches with only two wins guaranteeing qualification.

The form of goalkeeper Joe Hart will also be a concern for Hodgson following the Manchester City player's poor performance against Bayern Munich on Wednesday, although his options remain limited with Ben Foster still out with a broken foot.

Celtic keeper Fraser Forster and Norwich's John Ruddy are likely to keep their place in the squad but both are inexperienced at international level. Forster is still waiting to make his debut while Ruddy's only appearance came in the friendly with Italy in August 2012.

Theo Walcott is definitely out after undergoing abdominal surgery.

If Rooney is fit then Hodgson will have two of the Premier League's in-form strikers available to him.

Rooney and Liverpool's Daniel Sturridge have scored 12 goals in 15 matches between them this season. Southampton striker Rickie Lambert, who has scored two in three for his country, was back on the scoresheet for Southampton last weekend.

England currently top Group H but are just one point ahead of both Ukraine and Montenegro.

They face Montenegro a week on Friday and Poland four days later.

Ukraine are expected to win their final two qualifiers against Poland at home and San Marino away so England need to match their results to avoid the lottery of the play-offs.