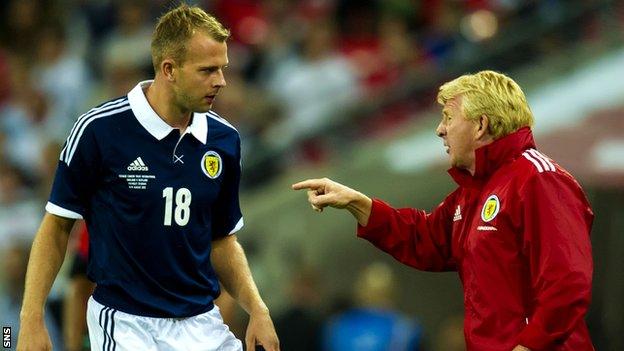 Striker Jordan Rhodes could be handed a starting role by Scotland manager Gordon Strachan in the final World Cup qualifier against Croatia at Hampden.

Strachan had previously suggested that the 23-year-old Blackburn forward was unsuited to a lone striker role.

"He's got a better chance than most people because he is in the squad and he is scoring goals," said Strachan when asked about the 15 October game.

"He has a right good chance of playing next time we play."

He has got to understand what he can and can't do, what he needs to improve to be a top, top player

Rhodes has for his Championship club this season, but Strachan still admits to having reservations about how the player can perform in Scotland's system.

When asked whether it would be difficult for Rhodes to start international games, the manager said: "It depends what team you are playing for in international football.

"If you are a team that's getting 20 or 30 crosses a game then it's not difficult.

"But, at this moment in time, we are not getting that. We have got to try and get to there.

"I can assure you if we get to 20 or 30 crosses a game then any striker would be happy."

Rhodes has 11 international caps, but eight have come as a substitute.

Strachan used Wolves' Leigh Griffiths and Everton's Steven Naismith as lone strikers in the World Cup qualifiers against Belgium and Macedonia in September.

The Scotland manager thinks Rhodes, who pulled out of the squad ahead of the latter game with a broken hand, must continue to adapt to international football.

"Jordan is a young man who is going to get better as he gets older," added Strachan as he .

"He has got to understand what he can and can't do, what he needs to improve to be a top, top player.

"But he has got the intelligence to do that. He has been well-schooled by his father and his family."