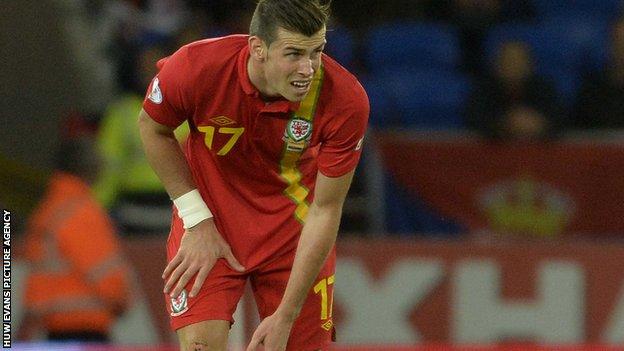 Gareth Bale will miss Wales's final two World Cup qualifiers because of a thigh injury, despite being named in the initial squad by manager Chris Coleman.

Bale has played just three games for Real Madrid since his £85m move from Tottenham and will stay in Spain for treatment with his country's blessing.

Midfielders Joe Allen, Joe Ledley and Andrew Crofts have all also withdrawn from the squad with injury.

Wales host Macedonia on 11 October and then play in Belgium four days later.

On the absence of Bale, 24, Coleman said: "After naming the squad I was told he had a problem. It looks like he will possibly be out for two weeks.

"It is a massive blow. A player of his talent would be a loss to anybody, especially to us. Offensively he is the key that opens every door."

Swansea's Ashley Williams has been included in the squad, although the captain remains a fitness concern with an ankle injury - but fellow centre-back James Collins is left out.

After the 3-0 defeat against Serbia in Cardiff on 10 September, Coleman was critical of the West Ham player and said he had rejected the chance to join the squad ahead of the game, a claim Collins denies.

Crystal Palace's Jonathan Williams is another injury absentee, adding to the problems in midfield with Allen, Ledley and Crofts all missing - although Brighton's Crofts would have missed the Macedonia game anyway through suspension.

Craig Bellamy has been included for what are likely to be his final competitive games for the Dragons. The Cardiff forward has said he is unlikely to take part in the Euro 2016 qualifying campaign.

The upcoming double-header could be crucial to Coleman's future as Wales manager.

He is still in negotiations to extend his deal beyond the qualifying campaign and Football Association of Wales chief executive Jonathan Ford has in the next two World Cup qualifiers.

Wales are bottom of Group A but could go above Macedonia with victory at the Cardiff City Stadium, although Coleman's side must then face leaders Belgium in Brussels.