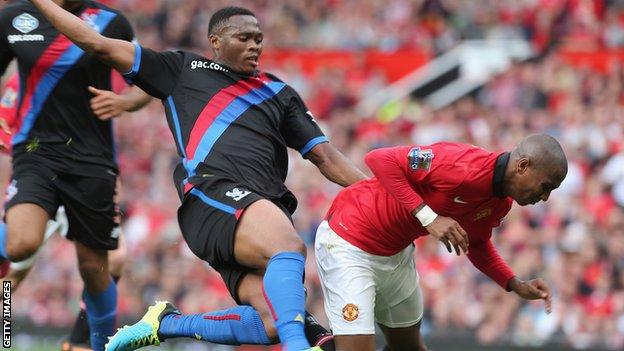 Palace are next to bottom in the table with only three points from six games since promotion from the Championship.

However, the 28-year-old told BBC Sport: "The confidence is still there.

"No-one is letting their heads drop - despite the last few results - and we know that one match and one good result can make all the difference."

Palace's defeat to Southampton on Saturday was their fifth in six matches since coming up via the play-offs last season, with their only points gained with victory over Sunderland at Selhurst Park in August.

Ian Holloway's side face a trip to second-placed Liverpool on Saturday knowing even a win could leave them still in the bottom three.

"We always expected things to be tough in the Premier League because we are up against the best teams in the country - but we have time to turn things around," Dikgacoi said.

"Our aim is to be out of the relegation zone before January because we have a run of matches coming up where we can definitely pick up points."

Dikgacoi, who had a loan spell at Selhurst Park before joining from Fulham in 2011, also believes the club's new signings need a little more time to gel.

Dikgacoi is certain they will eventually provide the quality needed to give Holloway's side a chance of survival.

He said: "None of the new signings took any part in pre-season so it's always going to be tough for them. But we have signed some good players who have experience of playing in the Premier League so it's just a matter of time before you see the best of us.

"We just have to keep believing we can do it and keep working hard."

Meanwhile, Dikgacoi is set to link up with South Africa for the friendly in Morocco next week having recently launched his own charity.

The Kagisho Dikgacoi Foundation will have its official opening in London at the end of the month.

"Whenever I'm back home I try to give some help to charities out of my own pocket," he said.

"We've been holding a football tournament in my home town of Brandfort for a few years, but I wanted to set up the foundation to try to provide more opportunities for young people, not just in sport. It's also about education and giving people who aren't as privileged a chance."

Dikgacoi added: "It was hard growing up and it still can be for some people today.

"That's why it's important to give back to your community. I know I'm really lucky to be playing professional football in England and I never forget that."