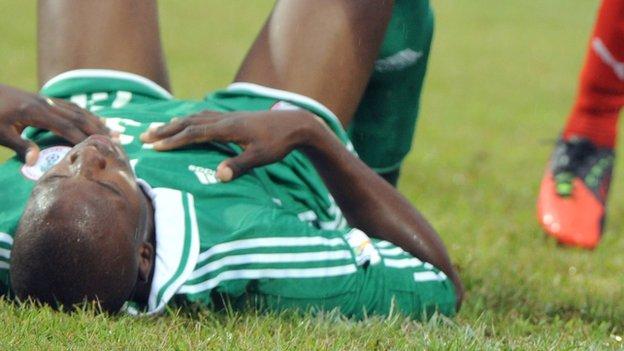 Nigeria expect striker Shola Ameobi to be fit for their 2014 World Cup play-off first leg against Ethiopia in Addis Ababa on 13 October.

Ameobi has been sidelined by a knock picked up while on international duty last month and his club Newcastle said he would be out for several weeks.

It has led to questions over whether the 32-year-old should be in the squad.

But Nigeria coach Stephen Keshi told BBC Sport: "Shola has given me a strong assurance that he will be fit to play."

It's not always the best team that wins, but the team that really wants it the most

Ameobi has not played for Newcastle since 31 August and his last match was Nigeria's friendly win over Burkina Faso on 10 September, when he scored his first goal for the Super Eagles.

Keshi, though, has hit back at critics who have suggested Ameobi should not have been considered for the upcoming play-off.

"I don't think it's fair for people to simply rule him out when they are not our team doctors," Keshi said.

"I've been monitoring all the invited players and there is really nothing to worry about.

"We are going to go with our original list of invited players and there will be no changes whatsoever to the squad."

Ameobi has made four appearances and scored once for the Super Eagles since he made his long-awaited debut against Venezuela last year in the United States.

Meanwhile, Keshi has conceded his team is still a work in progress and that the upcoming double-header could be vital for some of the players.

"The door is not shut on anyone or group of players. Let's continue to build and put out a strong Super Eagles squad," he said.

"It is also important to remind people that giving new players a chance is not based on sentiments but in the interest of the country.

"We need players that will improve the Super Eagles because the present team is not the finished article.

"But I have told the boys they must work hard. It's not always the best team that wins, but the team that really wants it the most."

The African Champions will host Ethiopia for the second leg of the play-off in Calabar on 16 November.