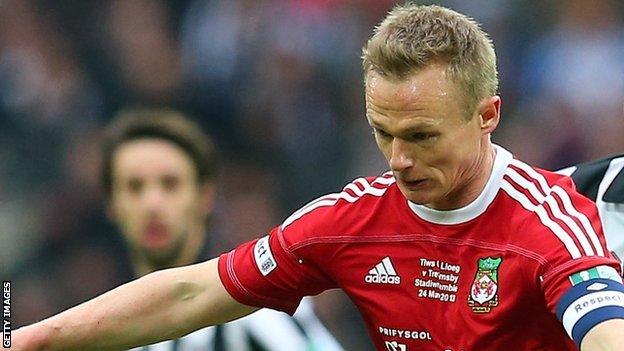 Wrexham player-manager Andy Morrell is hopeful of having captain Dean Keates back in action soon.

The midfielder underwent surgery on a toe in July and has yet to appear for the Dragons this season.

Saturday's trip to play Salisbury in the Conference will come too soon, but Morrell says there is a good chance the 35-year-old could return soon.

"In the next week we'll be looking to get him back in full training and maybe involved in games," Morrell said.

"He's quite a way from full fitness but he's played 45 minutes [in the reserves], he's really good off the pitch, he does his work, a great pro.

"He's still having a few problems with his feet but he's better every day, so hopefully with another week of training and physio he'll be able to come through back."

Last weekend's ended a run of three defeats, a sequence not helped by a lengthy injury list.

Morrell does not expect any of his casualties to be ready to face Salisbury but believes the tide is turning on the injury front.

"A couple have trained this week but possibly won't be ready for Saturday," confirmed Morrell.

"Maybe next week they'll be back training fully and looking towards games but I don't think we've got any new faces for the weekend."