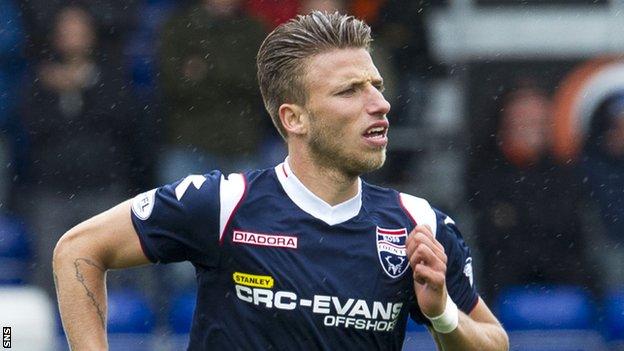 Ross County's Melvin de Leeuw believes the Scottish Premiership is on a par with the Eredivisie, with most clubs capable of mounting a challenge.

"It's 12 clubs and 11 clubs can win from each other without Celtic," said Dutch forward De Leeuw.

"But the other teams are also good, but they can win from each other."

The former Cambuur striker was on target in County's late comeback against Hearts last month and also set up Richard Brittain's 90th-minute winner in the 2-1 victory.

He also found the net in the on Saturday but is keen to make amends for that loss when Aberdeen travel to Dingwall at the weekend.

"It's the same in Holland, everyone can win from each other, so it's what I'm used to, but Aberdeen is now in fourth place, so we can learn from them," said the 25-year-old.

I feel good. I'm totally settling in now, so I'm ready to show what I can do and I think the last two matches it's been going well, but I think I can do better

"It's not easy, but we are a good team and we do better every weekend. If we make our chances then we'll win.

"The last two weeks, I've been very pleased. I came here to play in the squad and it has gone well for me and also for the team."

De Leeuw thinks the Dutch contingent at Victoria Park has helped him find his feet quickly.

"It's good for us because, if you have something to speak about, you can speak with the other Dutch boys - but also with the other Scottish boys in the squad - but it's nice to speak your own language sometimes," he said.

"I feel good. I'm totally settling in now, so I'm ready to show what I can do and I think the last two matches it's been going well, but I think I can do better."

Adams echoed De Leeuw's views on the Netherlands influence on his side and was encouraged to see all four Dutch players vying for a place in his starting XI.

"Melvin has done well in the last two games," said Adams. "He was injured at the start, but he's a player we've got high hopes for.

"The likes of Luckassen and Maatsen coming in from Holland and Klok coming back from injury, so the Dutch boys are all doing well and we're delighted with the progress they're making.

"They'll do well for the club. I watched Maatsen in the reserve match the other night and he was excellent - they're all pushing for starting positions."