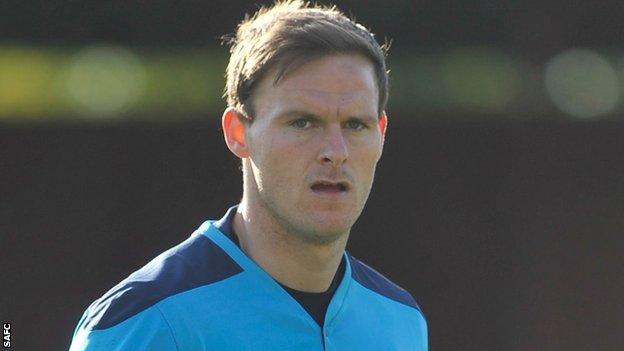 Carson, 25, who began his career at Sunderland, will provide cover for John Sullivan and Phil Smith.

Racon made 16 appearances while on loan with Pompey last season.

"I've been training by myself over the summer, but I feel fit and can't wait to get started, 29-year-old Racon told the club website.

Explaining his decision to sign Carson, manager Guy Whittingham told BBC Radio Solent: "Goalkeepers will always be scrutinised, but if you feel your have to strengthen then you have to do it."

Meanwhile, goalkeeping coach Alan Knight has given up his role for health reasons and will now take up an ambassadorial role with Pompey.

"He is a legend here and there will always be a role for him at this football club," Whittingham said.

"There were some issues with Alan that we had to look with and we've dealt with it very professionally."

"Phil Smith will taken the mantle for the moment and we will look to see how he deals with it. We hope he steps up."