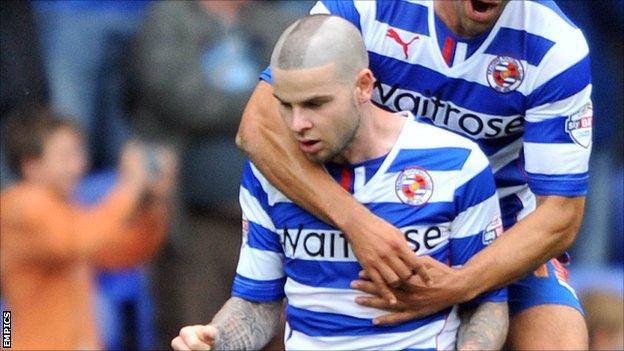 Guthrie's recent performances have seen him nominated for player of the month but his form is in stark contrast to 12 months ago.

The 26-year-old fell out of favour under former Royals boss Brian McDermott, but he says he is reborn under Adkins.

I've been shaving my head, and was dared to leave a stripe for the Birmingham game. I scored two goals so it had to stay

"You probably find it hard to believe but it can be a lonely, hard place to be a footballer sometimes.

"You learn from your mistakes and I'm a wiser person, happy to be where I am at the minute."

In October 2012 there were reports that Guthrie had fallen out with McDermott, and six weeks later the then Reading manager revealed Guthrie refused to travel with the team to Sunderland.

Although Guthrie later healed his rift with McDermott - who was sacked in March - and won his place back in the team, he struggled to find his best form.

But the arrival of Adkins, and a change in system, has seen Guthrie establish himself as a key part of the Reading midfield.

"Everyone wants to play, especially recently when we have been picking up some really good results," he said.

"I'm enjoying my football and enjoying playing under Nigel Adkins.

"You never stop learning. I've faced some difficult times and the last 12 months have been interesting.

"We play a different system. We play out from the back which the manager wants and which suits me more.

"I always want the ball. I guess you could say the system suits me a lot more now and I hope that comes across in my performances."

Guthrie, who scored twice against Birmingham, has also been sporting a mohican hairstyle.

"I've been shaving my head, and was dared to leave a stripe for the Birmingham game," he explained.

"I scored two goals so it had to stay. I'm not really that superstitious but it's not often I score two goals.

"I took a lot of stick but I've gone too far now so I'm fully committed."