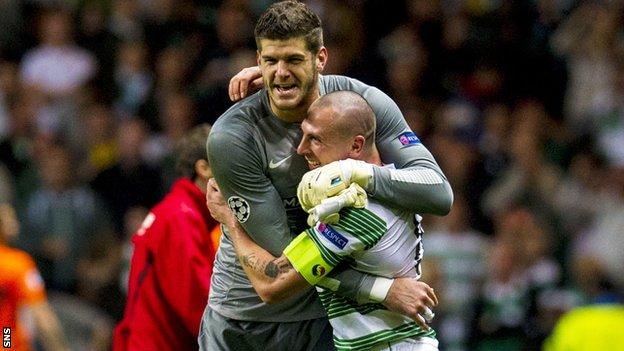 But Hodgson said: "I've got great faith in Joe Hart.

"I've got no doubt in my mind that Joe will come through these two games and get us the results we need and put one bad game behind him."

Hart has made some recent high-profile errors, leading to speculation over team selection ahead of the announcement of .

Meanwhile, Forster was praised following his display in the midweek .

Hodgson, though, says the 23-year-old will have to wait until the qualifying campaign is over before earning his first England cap.

"We're pleased with Fraser," said the England manager. "We think he's done very, very well. I'm impressed with him when he joins up with us and I think he's got a great future.

"Certainly, I think it would be a mistake to suggest that he, at this moment in time, should be given the responsibility of going into these vitally important games.

"Unfortunately, the players that have the most experience and who have the shirt, they are the ones who have to make sure they deserve it and that they're worthy of it in these two games and then we'll see what Fraser can do in-between now and the summer."

The third goalkeeper in Hodgson's squad, Norwich City's John Ruddy, has earned one England cap since spending time on loan to Motherwell.

Hodgson pointed out that Hart had kept clean sheets in the recent games against Moldova and Ukraine and had only conceded three goals in eight games.

"It'll take a lot more than a bad game for any player before I start suggesting he needs to be replaced," he said.

"Especially with our situation at the moment, because, let's be fair, these games we need experience, we need players who are tried and tested.

"We need people who play regularly at the very top level and, if you look at the goalkeepers with those criteria, he is clearly the number one."

"Delighted to see Fraser in the squad, great recognition for him and Celtic," he said on Twitter.